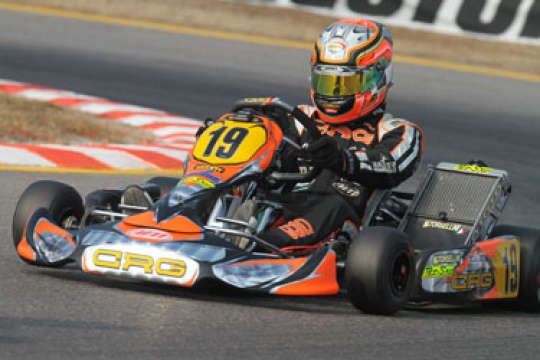 CRG-MAXTER OFFICIAL TEAM PLAYED A LEADING ROLE IN KZ2, EVEN THOUGH THONON AND FORE' MISSED WIN. EXCELLENT FOURTH PLACE FOR TORSELLINI. GOOD RESULTS ALSO IN KF2 AS WELL AS IN KF3 THANKS TO THE YOUNG DRIVERS OF THE TEAM. EXCELLENT PERFORMANCE FOR THE LH RACING ITALSPORT TEAM

The first event of the racing season, the Winter Cup of Lonato, saw the participation of all the official constructors and 273 drivers from all over the world. The event was characterized by the interesting performances of the CRG-Maxter official team. The first contest of the season was, as expected, a more than valid test to gather the necessary data before the beginning of the forthcoming 2012 international championships.

PROTAGONISTS IN KZ2. According to the tradition, CRG Team achieved great level performances in the top category, the KZ2. Also in the Winter Cup of Lonato, the Road Rebel chassispowered by Maxter were always competitive, occupying the first places of the rankings thanks to  Jonathan Thonon, Davide Forè, Mirko Torsellini and Fabian Federer: they were winning and hard-fighting in every situation.
A crash in the pre-final after few curves of the first lap, caused also by the asphalt which was still wet after the rain in the morning, did not allow Forè to express as he would have liked to. So, the "baton" was handed over to Thonon, who managed quite easily to take the lead and win the race, with Torsellini who got an excellent third place while Federer was slowed down by another crash. In the final, Thonon's pole position was made useless by a jump start which cost Thonon a 10-second penalty, while Forè and Federer gotinvolved in other crashes. So, the driver who achieved the best result was the young Mirko Torsellini (see picture above); he was among the top drivers since the time trials and did his bestduring the qualifying heats and the pre-final. In the final he really came close to the podium and, eventually, he got an excellent fourth place behind expert drivers such as Dreezen, Kozlinski and Abbasse. He was the first of the CRG drivers. 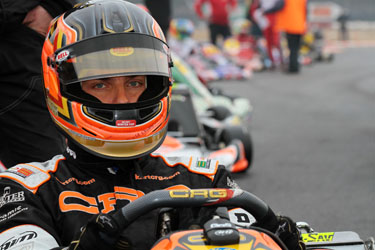 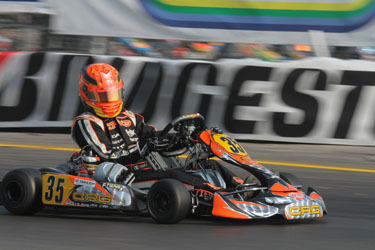 GOOD CONFIRMATIONS IN KF2. In KF2, Felice Tiene gathered the best results for CRG thanks to his 7th place. He could have done even better, but the Italian driver was obliged to start from the back rows because of a difficult start in the pre-final, where anyway he managed to recover as far as the 15th place. In the final, after an awesome recovery, he arrived in 7th. The English Jordon Lennox-Lamb was not as lucky: he was stopped by an accident in the final after showing all his fighting qualities throughout the weekend. The other English driver, Luke Varley, did not manage to qualify because of a series of accidents.

PALOU IS IMPROVING IN KF3. In the junior category - very crowded thanks to its 104 entrants - the Spanish Alex Palou Montalbo achieved the best result for CRG, placing 11th in the final after going through the second chance heats and qualifying for the final. Palou's performance in the pre-final was particularly remarkable: from the last rows of the grid he managed to arrive 15th. The Brazilian Victor Baptista and the American Santino Ferrucci were less lucky: they were obliged to take part in the second chance heats but they missed the qualification to the final phase.

EXCELLENT DEBUT FOR THE LH CHASSIS. Great debut for the LH Racing Italcorse Team at the Winter Cup of Lonato with the LH chassis produced by CRG. In KF2, the English Tom Joyner was outstanding. Heplaced 4th in the KF2 final, but also Christian Sorensen, despite being slowed down by an accident, achieved a good performance. Good result also in KF3 thanks to the 5th place got by the Swedish Ilari Piispanen.

THE INTERVIEWS. Euan Jeffery, CRG sports manager: “This Winter Cup race was a good test, thanks to the presence of all the major protagonists, especially in KZ. We used the Road Rebel chassis powered by Maxter and prepared by TecSav for Thonon, Forè and Torsellini, while Federer used an engine directly developed by the factory and his performance was really good. Thonon's weekend was excellent and it is a pity it was spoilt by the jump start in the final. I was also sorry for Forè who touched Ardigò during the pre-final, otherwise things would have ended differently. However, everybody did well:Torsellini, for example, fought hard for the first positions. He is young but he is improving fast. Federer started from the back positions and got involved in several crashes which slowed him down, but after all the weekend was positive. In KF2 we got good confirmations for the development of the engine, and Tiene's performance was good as well as Lennox's and Varley's, even though they were slowed down by accidents. In KF3 we have got new drivers. In thiscategory, the Spanish Palou did well throughout the weekend, while Ferrucci was unlucky in the second chance heat. Baptista was at his first race in Europe, but showed his good potentialities”.

Jonathan Thonon (KZ2): “Eventually, the weekend went well for us. We worked well to find the right setup for the chassis and, in fact, I was always among the fastest in the time trials and in the heats, and also on Sunday morning, during the wet warm-up. I won the pre-final smoothly. But in the final everything turned out to be harder. I made a jump start and got apenalty. Anyway, I want to say thank you to the team for the excellent CRG equipment, to TecSav for their work on the Maxter engine and, last but not least, to my mechanic Omar. We have worked well and I have great expectations for this 2012."

Davide Forè (KZ2): “During the all weekend I was very fast, and I even won a heat. Then, unfortunately, things changed dramatically because of the rain before the pre-final. The track wasn't completely dry and this made things a bit complicated. I was second after the start and at the hairpin bend I tried to overtake Ardigò but we both wanted to keep the position. The consequence was a rather tough crash. In the final I started from the back rows and I got involved in the tussle! I started again from the last position and I achieved a series of very fast laps. I'm sorry for how things turned out, but we got a very important result anyway: now we are aware that we are handling top quality equipment, with a good match between chassis and engine which will give us great results this year."