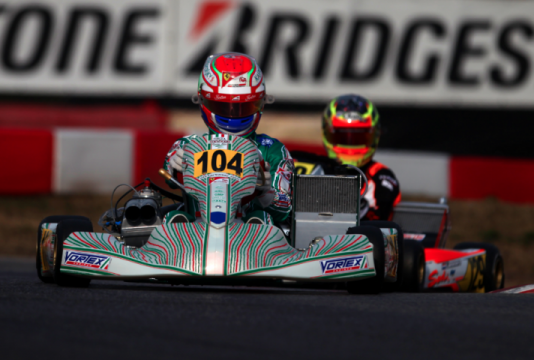 The young Italian talent left the international karting in 2013, starting a brilliant career in single-seater (F Renault, F3, GP3 and GP2), which soon took him into the élite of the Ferrari Driver Academy.

On his international debut in the category with the gear, KZ, Antonio got off on track as protagonist, quickly becoming part of the best world’s experts.

Antonio Fuoco: "Going back to karting is always a good practice. Especially now that the winter break is long and runs from November to mid-March. A little training does well and particularly with KZ chassis, a kart with the gear, it was an experience that I missed and thus very positive. I enjoyed and at the same time I learned a lot. Attending this race has meant to me understanding things that I did not know of the KZ. "

What are the things you discovered running in KZ, you who were one of the international protagonists of the KF single-speed categories?
F. "I learned a lot, about how to jump from standstill and how to manage the first few laps in the tussle. Right the behavior you have in the early laps, everybody with the KZ, is very similar to how we behave with the single-seat car. This thing helps me, giving me new ideas about where to overtake and how to handle situations which are also found in the car races. "

You’ve gone back to karting on the occasion of an event, the Winter Cup, which entry list included many top drivers, many-time-champions, with European and World titles. It was a choice done for a great passion and has meant a strong synergy with your kart. Are you satisfied about the result?
F. "If we consider pure lap times the feedback was very positive. I did a little fatigue in some moments of the race because I had no experience of the kart with gears, also my rivals were drivers of value that were running very aggressively. I absolutely did not want to risk hurting me, so I raced with the thought of the new season. Well clear are the lap times in the qualifying (3rd group time and 6th absolute) and in the warm-up, performance which proves my competitiveness and the quality of the Tony chassis. "

You were a OTK Group’s driver in the last year of your career in karting. What is your impression after some years of absence?
F. "My last year in karting was with the Kosmic Kart, so I have always run as part of the OTK Group. The material always work very well, now as then, and this aspect has facilitated me. I found a good synergy with both material and team. As I said, the final result did not come only for bad luck, following an accident in a heat, but the speed and the potential to do well was concrete. This opportunity came thanks to the cooperation that exists between Tony Kart and FDA, for this I wish to thank Roberto Robazzi and Massimo Rivola. "

Will you attend other races, considering the handsome comeback?
F. "Attending the next races I do not think it will be possible since we are having the collective tests of the GP2 in the same days, so I will not have time to reconcile things. I will take part for sure in the FDA Campus scheduled after the WSK race in La Conca. The kart is a great workout and the training camps we do with the OTK team are really important and useful. "