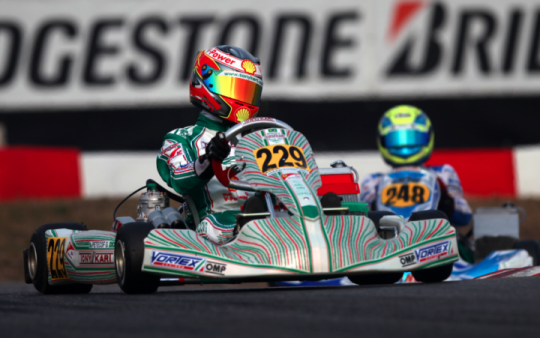 Press Release by: Tony Kart Racing Team
The 22nd Winter Cup’s edition has a double face. On one hand, they got the confirmation that the chassis employed are the most appreciated by drivers and teams from all around the world (32% of the entry-list). On the other hand, a little disappointment for the success that they missed due to unlucky accidents (with no fault) occurred to their drivers.
From a sporting point of view, the 22nd edition of the Winter Cup in Lonato has not rewarded the Tony Kart Racing Team with a result up to expectations. Just in the final stage of the weekend their drivers have been cut off from the fight for the success. Particularly in OK class, both Hiltbrand and Vidales (winner of a heat) were involved, blamelessly, in accidents who have stopped their run in the top race positions. Pedro, after closing the super heat in second place, jumped very well from the final’s starting grid and his Racer 401 S was in the very first. Also Gianluca Petecof and Clément Novalak has given their contribution to make this final even more thrilling. Both drivers performed a very good comeback in the final, with several overtakings and fast laps. Petecof crossed the chequered flag fifth, while Novalak got a penalty for the front bumper not correctly mounted, which cost him the seventh place.

In OKJ category Gustavsson finished the final in sixth place, performing the whole race with a great comeback, with not less than nine overtakings. Swedish driver, in the heats sequence, had shown already to have a high potential, closing with a second and a third place, until his stop in the third heat. The quality of our material was also confirmed from many other drivers running in the cadet class, who fought for the success. Among them, the more brilliant was the Argentinean Colapinto (Baby Race Team), second place.


In KZ2, Ardigò, after heats run at a high level with a best lap (heat A-C), lost ground in the tussle of the first laps of the final and crossed the finishing line in tenth place.

Among the 75 Mini Rok drivers, Antonelli performed very well, getting a second place in the heats and the third one in the super heats. In the final, the Tony Kart brand had its best performer in the Russian Bedrin (Baby Race Team). The latter fought against Spina, crossing the line with an uncertain result, decided in the photo-finish.

The balance after the first three international competitions is excellent and the technical feedback collected so far let they able to look forward to the next events with great enthusiasm. The development program, of both chassis and engines follow a perfect course and our technical staff is, undoubtedly, satisfied with it.
A further confirmation of the validity of the material developed and tested by their Racing Team is given by the important presence, in the entry lists, of Tony Kart chassis, more than a third of the total entries to the competitions done so far.