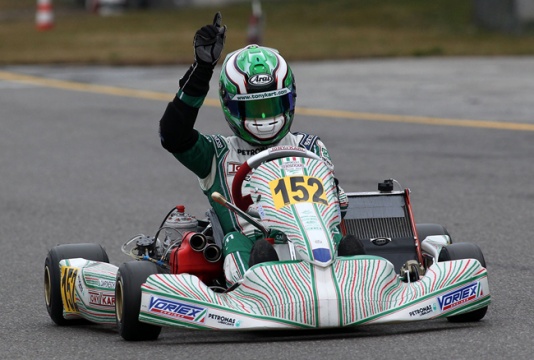 Press Release by: South Garda Karting (Lonato)
A tight and long weekend at South Garda Karting ended with the victory of KZ2 going to Flavio Camponeschi, that of KF to the Dane Nicklas Nielsen, KF Junior's to the Swede Christian Lundgaard and Mini Rok's to Luigi Coluccio.
The 20th Winter Cup has been blessed with sun in the final stages of the very long and tight weekend, which replaced the bad weather of the eve and elicited a great spectacle in this very important international event at the beginning of the karting season. The race has been valid also as first of the three rounds of the Bridgestone Supercup Trophy.

A total of 240 drivers coming from 36 countries have been the protagonists of the weekend giving their best under the rain to gain a pass to the final stages of the four categories. They eventually found the ideal tarmac conditions to unleash their competitiveness, despite the new CIK-FIA regulations on the nose anchoring producing a series of penalties and some surprising end results.

CAMPONESCHI IN KZ2. The KZ Vice World Champion driver from Rome of Tony Kart Flavio Camponeschi confirmed his great shape after being very quick since the beginning. His main rival in this Winter Cup has been the new entry at CRG Paolo De Conto, last year's winner claimed in fact the victory in the Prefinal, but then had to give up in the Final as he broke the chain when holding P2 right behind Camponeschi. The second place was therefore inherited by Bas Lammers (Formula K-Parilla), while the third position was obtained by Marco Zanchetta at the debut on Alpha -Tm at the end of a good comeback race. At the end of the race Lammers was disqualified though due to an irregularity on the nose of his kart, and therefore Zanchetta was promoted second, as the Dutch Menno Paawe (Birel Art-Tm) inherited the third place, ahead of the other CRG driver Simo Puhakka and of Lammers' team mate Lorenzo Camplese. Great race also for the KZ European Champion from Belgium Rick Dreezen (Zanardi-Parilla) who ended sixth leadingNicolas Gonzales (Alpha-Tm) and Luca Corberi (Tony Kart-Vortex), as the latter recouped a stunning 20 positions. Top ten finish also for the three times winner of the Winter Cup Ben Hanleyon the new Croc Promotion, and for Mirko Torsellini on Ricciardo-Tm. KZ World Champion Marco Ardigò (Tony Kart-Tm) was slowed down by a contact with Anthony Abbasse (Sodi-Tm) instead.

NIELSEN IN KF. The Dane Nicklas Nielsen has been the quickest of KF and put in a one-two for Tony Kart together with the New Zealander Marcus Armstrong. The third step of the podium went toFelice Tiene (CRG-Parilla), who managed to have the best of the strong British driver Mark Litchfield (CRG-Parilla), who was eventually disqualified. The other top positions went to Oliver Hodgeson (Kosmic-Tm), Ben Barnicoat (Birel Art-Parilla), Benjamin Lessennes (Zanardi-Parilla), Juan Correa (Energy-Tm), Pedro Hiltbrand (CRG-Parilla), Leonardo Lorandi (Tony Kart-Vortex) andNikita Sitnikov (Crc Promotion-Tm).


KF JUNIOR TITLE TO LUNDGAARD. The Swedish driverChristian Lundgaard won the KF Junior, awarding Tony Kart-Vortex with three wins in this Winter Cup. The fight for the second place was won by the American Logan Sargeant (FA Alonso-Vortex) who proceeded the Finn Paavo Tonteri (Croc Promotion) at the flag. The fourth place went to the Chinese driver Sun Yue Yang (FA Alonso-Vortex), who was followed by the British Clement Novalak (Tony Kart-Vortex). The first of the Italian drivers turned out to be Lorenzo Colombo, eighth, on Tony Kart-Lke.

MINI ROK TO COLUCCIO. The Italian Champion Giuseppe Fusco, new entry at team Baby Race, managed to cross the finish line ahead of everyone else in the fourth category of the event, that is the Mini Rok -- single branded Vortex. But he was awarded with a 30 seconds time penalty at the end of the race due to the detachment of the nose of his kart, a very common incovenience in this Winter Cup. The victory was therefore inherited by Luigi Coluccio, also on Tony Kart, run by Jolly Team, who managed to pip Leonardo Marseglia (CRG) in the sprint to the line. The third place of the official classification was obtained by Edoardo Villa(Tony Kart) as Mattia Michelotto (Energy) was also handed a penalty due to the position of the nose of his kart. Prefinal B of Mini Rok was won by Jose Gomez Gutierrez on Croc Promotion.

All results of the weekend are available atwww.southgardakarting.it