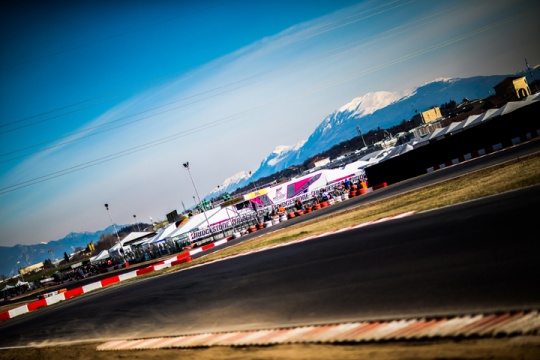 Press Release by: South Garda Karting (Lonato)
The South Garda Karting is about to house the 27th Andrea Margutti Trophy this coming weekend, a particularly important appointment for international karting that once again this year will have all what it takes to remember in the best possible way the driver from Rome that passed away early on October 14th 1989.
The total number of drivers in the four categories KZ2, OK, OK Junior and 60 Mini reached level 165 including a lot of foreign racers. Presence in KZ2 is great with a lot of top class drivers, as in 60 Mini and in the new category OK Junior, while category OK will see fewer drivers on track.

Category KZ2, that counts about 50 drivers, will have on track, among the others, the strong Croatian Kristijan Habulin on TB Kart, Alessandro Pelizzari on CKR, Sauro Cesetti with Jesolo, Matteo Zanchi on GP Racing and Alessio Piccini on Tony Kart. The Maranello Kart's pairing made by Massimo Dante and Tommaso Mosca will be among the main favourites alongside Formula K's Francesco Celenta, Leonardo Lorandi on Tony Kart, Alberto Cavalieri at the debut with Racing Team Officina del Kart on Maranello-Modena, Giacomo Pollini of Renda Motorsport on CRG, the German Alexander Schmitz on Tony Kart with team KSM Schumacher, Loris Spinelli on Parolin and Mirko Torsellini, at the debut with RB Racing on Exprit.

Among OK entrants, the Russian Alexander Smolyar (Tony Kart, Ward Racing) has been the quickest so far in the season and will get to Lonato as one of the main contenders to the victory. Hopes will also be high on the Italians Riccardo Cinti (Tony Kart) and Massimo Aceto (BirelArt).

The new category OK Junior will have a grid made mainly by foreign drivers as, out of the 44 entered drivers, the Italian lot will only be composed by Asia Mondino (PCR), Nicolò Genisi (Formula K), Alessandro Giardelli (Tony Kart), Lorenzo Ferrari (Tony Kart), Mattia Michelotto (Energy) and Andrea Rosso (BirelArt). Among the foreign drivers, a lot have good credentials to aim to the final victory, as the young and quick Brazilian Gianluca Petecof who will make his debut with CRG works team.

In 60 Mini a lot of the 60 young drivers on track have what it takes to be among the protagonists of the category. Among these, the main interpreters of this early season will get to Lonato with good chances, as in the case of Francesco Pizzi and Roman Stanek (Energy, Giugliano Kart), Federico Cecchi (CRG, Morsicani), the French Evann Mallet, Adam Putera and Riccardo Camplese (CRG, Gamoto) and Leonardo Caglioni (Evokart).

The programme of the 27th Andrea Margutti Trophy (CET):