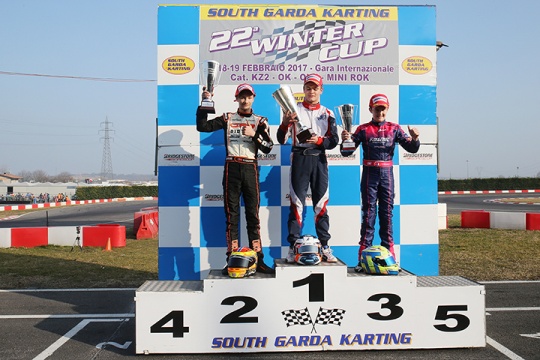 Press Release by: FM Press
Four red hot finals entertained spectators at the South Garda Karting circuit. Victory to Iglesias in KZ2, Travisanutto in OK, Thompson in OK-Junior and Spina in Mini Rok.
The 22nd edition of the Winter Cup of Lonato has been exciting and tight, producing a lot of karting spectacle for the numerous spectators present at this important international event.

A total of 276 verified drivers out of the 293 entered raised the sporting level of the event. The main contenders of the race have been battling the victory in the four Finals of the Winter Cup all the way to the flag.

The French Jeremy Iglesias (Formula K-Tm-Bridgestone) has been the protagonist of KZ2 after being the quickest in qualifying and at the end of heats. Iglesias confirmed his lead in the Final, taking an early lead and fending off the attacks moved in the closing stages by the World Champion Paolo De Conto (CRG-Tm), as the latter put in a great comeback race after a not very brilliant qualifying. The third step of the podium went to the excellent Dutch driver Bas Lammers (Sodikart-Tm), while Fabian Federer (CRG-Tm), second early on, had to concede some positions due to a contact and settled for P9. The Italian Riccardo Longhi (BirelArt-Tm) was fourth and the French Anthony Abbasse (Sodikart-Tm) closed in fifth place, leading Flavio Camponeschi (CRG-Tm), Rick Dreezen (BirelArt-Vortex), Ben Hanley (Croc-Tm) and Patrik Hajek (Kosmic-Vortex). Last year’s winner Marco Ardigò (Tony Kart-Vortex) ended 11th instead.

TRAVISANUTTO AND HAUGER BATTLING IN OK

Lorenzo Travisanutto (Zanardi-Parilla-Bridgestone) took an early lead in OK’s Final and engaged an interesting battle with the Norwegian Dennis Hauger (CRG-Parilla) and the French Theo Pourchaire (Kosmic-Vortex), who had the upper hand in qualifying. At the flag, Travisanutto pipped Hauger, as Pourchaire completed the podium in P3. The fourth place went to the Polish Karol Basz (Kosmic-Vortex), who was followed by the Brazilian Gianluca Petecof (Tony Kart-Vortex).

OK-Junior’s victory went to the British driver Harry Thompson (FA Alonso-Vortex-Bridgestone), who got the most of a racing contact involving the race leader Andrea Rosso (Tony Kart-Vortex) and the other main contender in the Final, the British Christopher Lulham (Tony Kart-Parilla). The podium was completed by Franco Colapinto (Tony Kart-Vortex) in P2 and Leonardo Marseglia (Zanardi-Parilla) in P3.

The victory of  Mini Rok went to the Sicilian Alfio Spina (CRG-Vortex-Bridgestone), who completed a stunning comeback race, pipping the Russian Nikita Bedrin (Tony Kart-Vortex) at the flag. The two drivers were very close in the sprint to the line, but Spina took the win by 10 thousands of a second. The third place of the podium went to the other Russian Dmitry Ignatov (Energy-Vortex).