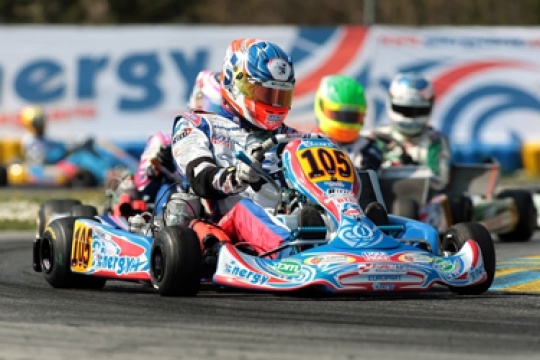 After celebrating two European titles in less than two months with Paolo De Conto in KZ1 and Sami Luka in KF2, as well as numerous victories in the WSK Euro Series, the Energy Corse team continues its impressive series of successful results! The recent outings of the team skilfully managed by Michele Panigada finished with several very important international victories at the German Championship, at the WSK Master Series as well as the Thomas Knopper Memorial.

Paolo De Conto has definitely had a golden season with Energy Corse. The new European Champion 2011 conquered another important title by winning the WSK Master Series. In KZ1, the Italian driver scored the highest number of points during the season. Seven times in the top 3, including four victories out of the eight races he took part in, De Conto amply deserved his crown. In early October, he also dominated the Thomas Knopper Memorial, held in KZ2 at Kerpen, Germany. After claiming pole position, he won the pre-final and the final, finishing ahead of drivers such as Joey Hanssen, Bas Lammers, and Michaël Schumacher! But he also owes his success to the engines prepared by Rizzi (TM).
Again in KZ2, Energy celebrated with the Dutchman Kevin Leijtens (Team Dobla), who became German Vice Champion with five podiums, including a victory at Oschersleben, in five races. Leijtens had already shown some brilliant performances at the World Cup at Genk. On that occasion, Joel Johansson proved he had the numbers to fight for the world title in KZ2. Unfortunately, when he was solidly in second place in the pre-final, the Swedish retired due to a mechanical problem, with three laps to go!

Providing its drivers with highly competitive karts is not the only goal pursued by the Energy Corse team, which continues to guide its young protégés in the merciless world of motor sports. From technique to racing strategy, nothing is left out when it comes to avoid the many traps of international karting meetings. All things considered, it is not surprising that they are among the leading contenders. At the WSK Master Series final round in Viterbo, there were as many as five Energy-TMs in the first 10 of the KF3 pre-final, with Robin Hansson, Connor Jupp, Dennis Olsen, Vasily Romanov, and Thiago Vivacqua. Half of the drivers! Another goal Energy has reached is that of treating all the drivers on an equal footing.
Swedish Hansson - winner of the final ahead of Jupp, who has quickly adapted to his new team - conquered the second place overall, just one point behind the leader. In KF3, Energy also won the title of German Champion with Olsen. Already winner at Genk and Wackersdorf, the Norwegian finished in beauty with another success at Kerpen. And it is on this same circuit that the Brazilian Vivacqua confirmed his huge progress with Energy by taking the top step of the podium at the Thomas Knopper Memorial. Congratulations for the TM engines prepared by GKS engine specialists!
As for KF2, the Briton Sam Snell played a leading role at the World Cup at Sarno. 26th on the pre-final starting grid after missing a heat, he brilliantly climbed up to 9th in the final. He repeated his excellent performance by reaching 5th in the WSK Master Series round at Viterbo. And this driver only joined the Energy Corse team at the end of July!