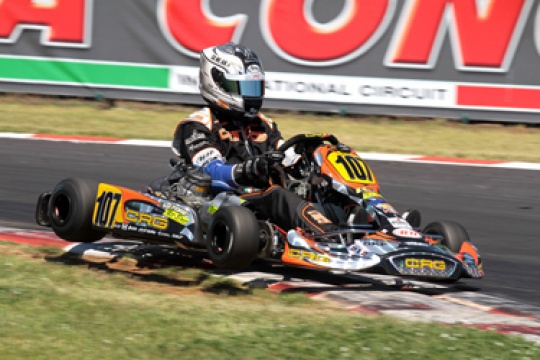 THE THIRD AND LAST BUT ONE EVENT OF THE WSK EURO SERIES WAS TOUGH BUT, ON THE WHOLE, RATHER FRUITFUL. THE BOILING HOT CLIMATE AND THE PECULIARITIES OF THE NEW ASPHALT OF THE TRACK WERE A HARD TEST FOR THE CRG MEN AND THEIR EQUIPMENT.

In the picture, Davide Forè in KZ1.

Muro Leccese (Lecce - Italy). Muro Leccese was a hard experience for the CRG Official team. The International Circuit La Conca was the venue of the third and last but one event of the WSK Euro Series: an important appointment especially for the championship rankings before the last event due by the end of July in Zuera – Spain. Unfortunately, the boiling hot climate and the peculiar conditions of the new asphalt were a hard test for the CRG Official Team men and their equipment. The final achievements were not as good as expected, however the team managed to gather important data for the forthcoming international events.

The asphalt temperature reached 78° C during the first racing day on Friday: the combination of high temperature with the new layer of resin - put on the track La Conca just the day before the race - gave such a strong grip that even the best tyres were not so performing and, consequently, it was impossible to find the ideal set up for the chassis. So, CRG had to work hard to set up their karts, but there were better results only by the end of the weekend. 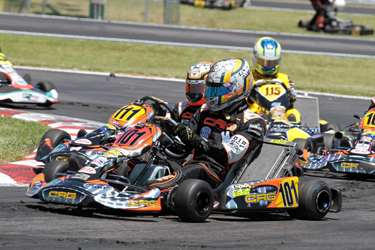 
The only podium of the event for CRG was the one conquered by Mirko Torsellini in the Saturday final, thanks to his win in KZ2. The success confirmed Mirko’s competiveness after the third place grabbed in Germany in the CIK-FIA European championship of Wackersdorf. Unfortunately, the success was not completed by a win also in the Sunday final, where Mirko went off track while being the undisputed leader of his category. Anyway, Mirko still holds the second place in the championship even though now the gap between him and the leader – Johansson – is really wide: from the 19 points lead after the first final on Saturday, to the 43 points after the second final on Sunday.

In the top category – the KZ1 – David Forè was once again the most performing driver for the CRG official team. He grabbed a good 7th place in the Sunday final just ahead of his teammate Jonathan Thonon, who was not able to run as fast as he usually can because of several technical troubles. Arnaud Kozlinski finished 13th in the Sunday final, after retiring on Saturday as consequence of an accident. Thonon can still arithmetically win the championship, but the main goal of the Belgian driver, which is also the goal of all the other CRG drivers of the gearbox category, is to get the best possible set up both of the chassis and of the engine for the World Cup, due next fourth September in Genk. 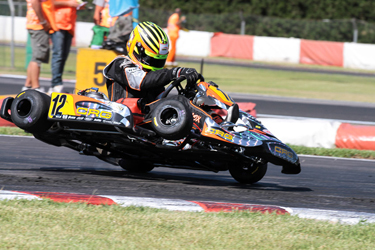 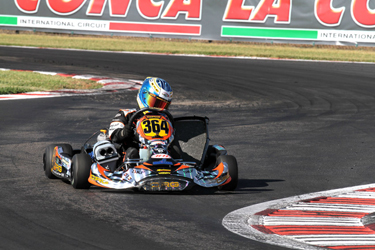 In KF1 CRG is keeping on developing the kart because it is peremptory to be once again performing in this category too. In Muro Leccese CRG worked hard looking for a better competitiveness, and in the Sunday final Felice Tiene got the best result with his 12th place. His performance got better and better since the beginning of the weekend and he eventually managed to cross the finish line ahead of Laura Tillett, who did well too and recorded interesting lap times. Jordon Lennox-Lamb (above, left) was particularly hard-fighting. He finished 17th despite being involved in a spectacular contact around half race.

In KF3 Max Verstappen (above, right), who suffered from a sheer back pain after taking part in the first time trials on Thursday and Friday, was obliged to quit. Despite some painkiller had been administered to him in order to allow him to participate in the first Friday heat, the Belgian driver was obliged to quit the race and leave the Southern Italian circuit after the first qualifying heat. So, the final result of the championship will be decided in the event of Zuera next 31st July, where we all hope Verstappen will be able to race in good shape and so defend his lead which is now reduced to 19 points. The Japanese Jina Jamakawa – who is still being trained - raced for CRG in the junior category (see picture on the side). Unfortunately, a crash in the last heat stopped him from taking part in the final phase.

The WSK Euro Series finishes in Zuera on 31st July. In the previous week, always on the Spanish track, the second round of the KF1 World Championship is in schedule, together with the finals of the KF3 and KF2 European Championships, where CRG Official Team is ready to get back in the game and play the leading role it deserves.


All the results of the WSK Euro Series third round on www.wskarting.com