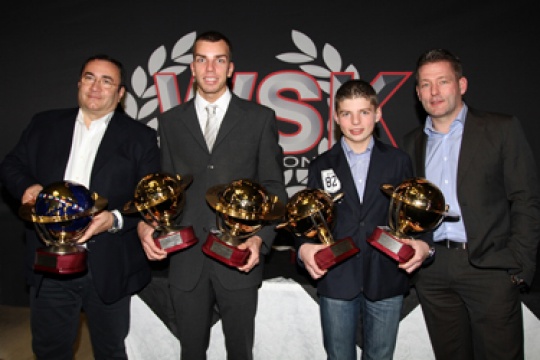 Crg drivers stand out during the 2010 WSK prize-giving ceremony. The 2011 official team will be introduced at the next “Kart and Race” fair. Among the drivers who have recently joined the team: Mirko Torsellini, Jordon Lennox-Lamb, Laura Tillet, Andrea Dalè and Max Koebolt

Montichiari (Brescia - Italy). With a spectacular prize-giving ceremony – which took place in the pavilions of the Exhibition Centre of Montichiari -, WSK celebrated its champions of the season which has just ended. Once again, among the major protagonists, the drivers of the CRG-Maxter official team who conquered a great number of trophies.
A dozen the titles won by CRG in 2010 in the WSK championships, both in the WSK World Series and in the Euro Series, besides the Nations Cup, with wins in the drivers’ and teams’ championships.
In KF3, the rising star Max Verstappen, the young Dutch driver son of the former F1 driver Jos Verstappen, swept the board. He was at his debut in the international category with CRG-Maxter, but despite this he managed to beat all his rivals winning all the three titles. On the other hand, in KZ2, it was the experienced and three-time world champion Jonathan Thonon who confirmed his talent and the performing qualities of CRG-Maxter both in the World Series and in the Euro Series.
The CRG Team, eventually, got the titles of the World Cup in KF3 and in KZ2, besides getting the second step of the podium in Super KF and in the Euro Cup in KZ1 and in KF3. 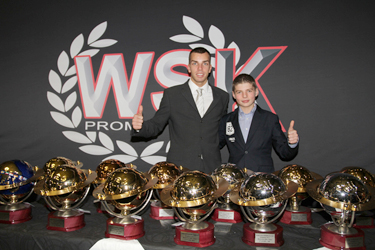 Jonathan Thonon and Max Verstappen with all the trophies won
by CRG in the WSK Championships in 2010.
Above, from left to right, Giancarlo Tinini, CRG SpA Chairman,
Thonon, Max and Jos Verstappen.

Other trophies were awarded to CRG for the third place in the overall ranking conquered by the American Gary Carlton in the KZ2 World Series and for the third place of the French Arnaud Kozlinski in the Super KF World Series.
It was a season full of successes for CRG, which could already boast a rich list of international trophies in its history, as Mr Giancarlo Tinini, CRG Spa Chairman, pointed out at the end of the ceremony: “We are very satisfied for the way the last racing season went. Winning all these trophies in very demanding championships like those of the WSK confirms once more the quality of our products and the talent of our drivers. It was a beautiful ceremony. We are participating in the WSK championships in 2011 too with an even more competitive official team, with new and important elements. An anticipation of the 2011 CRG-Maxter official team will be announced during the next “Kart and Race” Fair, due next weekend right here in Montichiari, even though we are still waiting for some confirmations to complete the KF3 and the KF2. For the time being, I can say that in KZ1 we will take part in the international season with Jonathan Thonon, Arnaud Kozlinski and Davide Forè, and in KZ2 with Mirko Torsellini, who had already run for the first time with our official team in Egypt in the last race of the World Series. Our representative in KF1 will be Felice Tiene, but we have two recently acquired drivers who will race for us in 2011: the English Jordon Lennox-Lamb and the quick Laura Tillet. Always in KF1 we will have Andrea Dalè, ready to come back and race for our team. In KF3, of course, we will have our champion Max Verstappen and another young Dutch, Max Koebolt, who in 2010 ran in the Academy CIK-FIA Trophy. In KF2, besides the confirmation of Giovanni Martinez and Mario Ziletti,we will have “Speedy” Antonio Fuoco, who will pass in this category after achieving good results in KF3. In KF2 there will be Alessio Profeta too, even though with the LH “Lewis Hamilton” line, which will be launched as a brand in 2011”