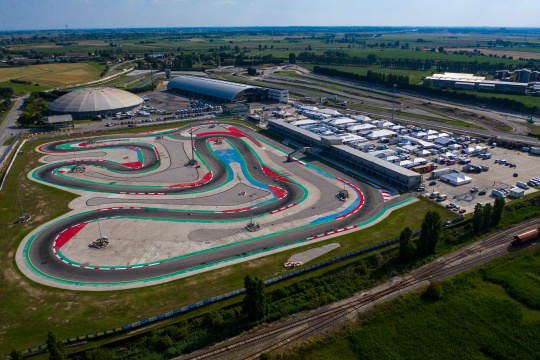 Author: Vroomkart International
The Open Cup 2020 comes to an end and so does the WSK season. Stan Pex (KR), Taylor Barnard (OK), Freddie Slater (OKJ) and Maciej Gladysz (60 Mini) are the new winners!
KZ2 - Pex cannibal of the queen class
On the last day of the competition, the KZ2 opened the dances with a double final, all for the two brand mates Danilo Albanese and Stan Pex (KR). The Italian put his seal on the first final of the morning, recovering from second position and taking Pex with six overtakings, third Van Walstijn (CPB). In the second final, decisive for the final victory, it was Stan Pex who maximised his starting pole position, escaping after the early stages of the race, taking the lead over Gustavsson. Second position for Van Walstijn, third Juho Valtanen (KR) again on the podium. Thanks to constant progression, glory for Pex overall winner of the Open Cup 2020, second Albanian and third Van Walstijn in the overall ranking.

OK - Barnard completes the work
Taylor Barnard (Rosberg Racing) avenges the final result of the OK World Championship. The Englishman completes the last masterpiece of his WSK season replicating the double victory in the pre-finals, with double success in the category finals securing the final victory of the Open Cup. Two races dominated from the first to the last lap with a gap of more than five seconds in the last final, a performance that suggests the level of superiority of Nico Rosberg's protégé. Norton Andreasson (Ward Racing) and Marcus Amand (VDK) finished second and third overall.

OKJ - Slater always in first place
Ricky Flynn Motorsport's Englishman proved not to be full after winning the World Championship. In fact, the Brit repeated his success thanks to his victory in the first final of the day, recovering three positions from the start on Kucharczyk (Birel Art) and Pasiewicz (Birel Art). In the second final, victory instead for Martinius Stenshorne (Lennox Racing) who also took three overtaking positions from the start, second Dodds (Energy), third Lindblad (KR), fifth place Slater, enough to win the trophy ahead of Lindblad and Pasiewicz.

60 Mini - Gladysz without rivals
In his last race in 60 Mini, the Polish Maciej Gladysz leaves no way out for his rivals by winning race 1 and Open Cup 2020. A triumphant ride for the driver Parolin, who was able to turn the situation around in race 1 by taking back the leadership at the last moment, also counting the penalty of Skulanov (Formula K). In the second final, victory for Tiziano Monza (Sauber Karting Team), fifth place for Gladysz, enough to raise the 2020 Champion Cup to the sky.