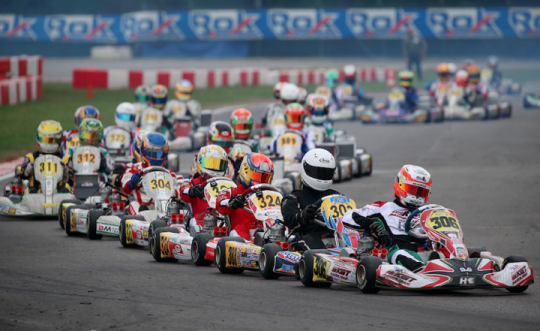 Press Release by: Rok Cup International Final
Italian drivers to the fore with the victories of Guidetti in Junior, Favaro in Senior, Cinti in Super and Marcon in Shifter. Mini Rok currently sub-judice.
The sparkling Rok Cup International Final 2016 has reached its conclusion at the South Garda Karting circuit of Lonato, with fireworks celebrating a well deserved victory in all the five finals of this great international event, that had a participation record of 413 drivers coming from all over the world.

The South Garda Karting circuit has sticked out once again for the level of its organization and hospitality, despite the high number of drivers that set a new world record for a single make championship. A stunning 45 qualifying heats had to be run in the three days of Thursday, Friday and Saturday to define the finalists of the five categories on track, namely Mini, Junior, Senior, Super and Shifter.

MINI ROK. Presence has been excellent in Mini Rok, as 168 drivers made it to the track. Spectacle has been high all the way through to the closing lap, when the two Italians Federico Cecchi (Tony Kart) and Pietro Delli Guanti (Birel) have challenged each other for the victory, together with the Russian Kirill Smal (Energy). The latter managed to take the lead in the closing meters and pipped his rivals at the flag, but he was later on handed a 3s time penalty due to an irregularity when three laps were still to go. The winner is not defined yet because the final classification is still sub-judice.

JUNIOR ROK. Junior final has been very interesting until the end, with several position exchanges on top towards the end, but Danny Carenini (Tony Kart) eventually managed to come out on top and to be the first at the finish line. The final victory went to Jacopo Guidetti (Tony Kart) though, as Carenini was handed a 10s penalty due to the dropped front fairing after a contact. Jacopo Guidetti was on the top step of the podium, the Lithuanian Gustas Grinbergas (Birel Art) was second and the South African Stuart White (Kosmic) third. The fourth and fifth place went to the two Polish drivers Kacper Szczurek (Kosmic) and Szymon Urbaniak (Tony Kart).

SENIOR ROK. The final of Senior has unfolded more linearly instead, as Simone Favaro won proceeding the Swiss Michael Muller and Domenico Cicognini. Italian Champion Alessandro Di Cori, had to settle for the final P4 after shining in the heats. The fifth place went to Lodovico Laurini, all on Tony Kart.

SUPER ROK. No doubts on the winner of this edition of Super Rok, as Riccardo Cinti (FA Kart) dominated the final after winning all qualifying heats. Cinti claimed therefore his third win in the Rok Cup International Final, leading Andrea Moretti and Jacopo Gheno at the flag, while Marco Moretti was fourth and Vittorio Maria Russo sixth, both on Tony Kart.

SHIFTER ROK. Nicola Marcon (Tony Kart) dominated the scene in Shifter Rok, managing to better Federico Squaranti (Tony Kart), who ended second after leading the first part of the weekend. The third place went to the Brazilian Gaetano Di Mauro (Kosmic), while the Swiss Dominik Weibel was fourth and Marco Vannini fifth. Former F1 driver Rubens Barrichello (Birel Art) was also present at this event, but he lost a few positions ending eighth after fighting for P5 with Flavio Sani  -- sixth on Maranello, and with the Swiss Antoine Bottiroli (GP Racing), who closed his effort in seventh place.