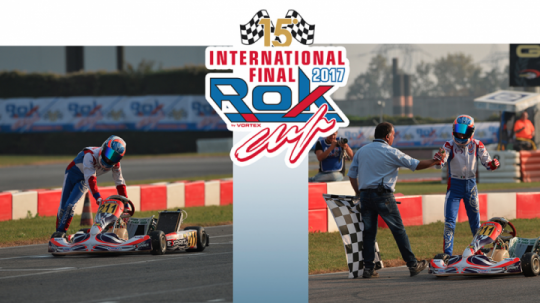 Press Release by: Rok Cup International Final
415 Rokker drivers on track for the Rok Cup International Final performed memorable feats. Everybody have in mind the 5 winners, however many other Rokkers won particular challenges, thanks to great performances.
ROKKER OF THE DAY = DOMENICO CICOGNINI
The young Italian driver Cicognini was the absolute protagonist of the Senior Rok final. Domenico ran as a champion, in the early stages of the race, and after a great start he overtook the leader Szymon Szyszko, and was able to gain the lead of the race to two laps from the end.
The fight between Szyszko and Cicognini was both spectacular and thrilling. The end of the race for the brave Domenico was unluckily unsuccessful and the young Italian has seen his prestigious success come to an end.
Cicognini's generosity and the misfortune that hit him were appreciated by the public and all the paddock, which reserved the Italian Rokker a great applause and many compliments.
The strong emotions coming from the Rok Senior final delivered the "Rokker of the day" title in the hands of: Domenico Cicognini.

BEST HELMET. A HELMET, A HISTORY….. FROM BRAZIL
Every helmet tells something about the Rokker wearing it, through its colors, decorations and special designs.
At the 15th Rok Cup International Final edition, between 415 Rokkers, it was not easy to select the most significant helmet, but in the end the jury found the winner in the helmet of Brazilian Andre Martins.
Martins ran in the Rok Shifter with a fantastic helmet that brilliantly mixed the colors of the Brazilian flag: yellow, gold, blue and green.
On the sides of Martins' helmet, in the middle of a kaleidoscope of colors, the Brazilian flag, while at the top, a precious filigree designed the names of friends and of all the people who have positively affected, supported and shared his passion for racing.

MANSON (NZL) - LONATO (ITA): 18,658 KILOMETERS
In the melting pot of Countries and cultures crowding to the South Garda paddock during the Rok Final, this year more than ever, every record has been beaten, with 49 countries representing five continents.
Among the 415 drivers on track, the driver coming from farther was the New Zealander of the Mini Rok, Logan Manson, whose town, Levin, is 18,658 kilometers away from the South Garda circuit of Lonato (Italy).

EXPERT. MANY DRIVERS STAND OUT
A special place for the award ceremony was reserved for Expert drivers. They are the Rokkers over 40 but with a teen determination who were thrown in the bunch of the Rok Final.
In particular, the Shifter Rok class was the most preferred by the Expert, with drivers such as Barrichello and Tonoli, able to compete as absolute stars.
In the end, the victory among the Expert Shifter drivers went to Italian Andrea Tonoli, who preceded the Italian Expert champion, Jacopo Vanelli and the Big Rubens Barrichello.
In the Super Rok class the Expert champion was the Italian Rino Passanisi, followed by Mexican Arturo Ysunza, climbing the podium, exploding all his great joy and making nice thanks.

FINAL BEST LAP
Winning the race is the main goal for all Rokkers. However, each driver, has also the strong desire to score the fastest lap in the final. This year, the goal has been achieved by two champions, Mattia D'Abramo (Super Rok - 48,009) and Mila Bartosz (Senior Rok - 48,634).
The other three champions, Albanese (Shifter), Zilisch (Mini) and Bosco (Junior), left the satisfaction of obtaining the best lap in race to Alessandro Buran (47,201), Piotr Protasiewicz (55,118) and Matheus Morgatto (49,757), respectively.
All the fast-lap winners have had the significant pleasure of being awarded during the final ceremony, collecting a well-deserved ovation.
A peculiarity to remark is that all the record laps have come very close to the absolute best lap of the event, signed by the pole position authors, however nobody has managed to get down to that limit.