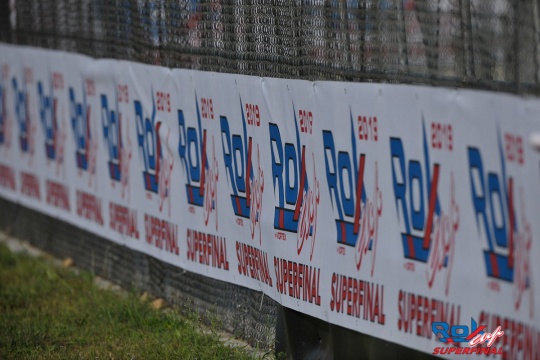 MINI ROK: HARD FIGHT AMONG 5, POWEL WINS
From the first row, only Gladysz (POL) is in the lead, while Roos (ZAF) loses many positions at the start. The Jamaican Powell is chasing the leader leaving Matveev (RUS), Sorensen (USA), Garzon (COL) and Przyrowski (POL) immediately behind.
Halfway through the race (12th laps) the group fighting for the Title is getting defined, with Matveev leader and Powell, Sorensen, Al Dhaheri (ARE) and Przyrowski very close to one  another.
The fivesome is with the leader Matveev and Powell immediately behind. The Jamaican, a few laps to go, manages to hold out against Sorensen and Al Dhaheri, conquering the 2019 Mini Superfinal Title.
Matveev is second and Sorensen third, but the disassembled front fairing of the American forces him to step back, bringing Przyrowski onto the third step of the podium. Sorensen centers the best lap.
In the brawl of the last meters, Al Dhaheri is out and the top-5 is completed by the Italian Marenghi and the Thai Tarnvanichkul.
MINI ROK SHINGA TROPHY.
The race dedicated to the drivers who could not take part in the Final is exciting; the Australian Lacey wins, ahead of Czaja (POL) and the New Zealander Sharp, author of many great overtakings.

JUNIOR ROK: FEDERICI BEATS RAGONE
In the heats, the names standing out are the Italian ones, Ragone, Federici, De Palo, Mazzola, Rinicella and Paparo, besides the New Zealander Zilisch, Superfinal champion in Mini 2017.
The first laps of the Final confirm that the Title will be something reserved for these seven drivers, able to score best laps from the start.
Ragone tries to spring forward but Federici fills the gap and enters the fight for the victory. The race, actually, will be determined on the eleventh lap when Federici takes the lead. Ragone is very close to the new leader but is not able to overtake him, while Paparo, third, is ready to avail himself of the situation between the first. These two are fighting one against the other running a perfect race, but in the end Federici manages to get the better of it and wins the title. Paparo completes a wonderful podium, while Zilisch, De Palo and Stifter, author of a very fighting race, close immediately behind.
JUNIOR ROK BRIDGESTONE TROPHY.
The New Zealander Douglas wins the Bridgestone Trophy, beating the Australian Pink and the South African Fourier.

ROK EXPERT: STADNIK FAILS AND RECOVERS
When the traffic light turned off, the Pole Stadnik is ready to take the lead, while the poleman Prokscha (DEU) slips to the fourth position, losing precious ground.
In the first phases of the race, the leader was followed by Cogato (ITA), Jader-David (USA) and Crupi (CAN).
Prokscha from the third lap on centers many best laps and overtook Cogato, Jader-David and Crupi, getting closer to the leader Stadnik during the 7th lap.
In his comeback, Prokscha is followed by the American Jader-David and on the 8th lap he overtakes Stadnik, defining the race for Prokscha who immediately gains a gap on the opponents.
Jader-David and Stadnik start a great challenge for the top position which the American comes through successfully, being the author of the decisive overtaking on the second-last lap.
Prokscha, Jader-David and Stadnik step onto the podium of the Superfinal Expert, followed by Cogato and Crupi.
The best lap of the Final is centered by the Brazilian Massoni.

ROK EXPERT PLUS:
The Italian Rok Champion Donadei (ITA) starts perfectly and take a slight gap on the opponent to be feared the most, Baselli (ITA).
After a first stalemate, Baselli pushes very hard, scoring the best lap of the category and getting closer to Donadei. On the 5th lap, he manages to overtake him and conquers the title he longed for from the very first editions of the Rok final.
Donadei proves to be a great opponent but he finishes second, ahead of Jacometti (BRA) and Mahpud (IND).
The best recovery of the final is carried out by Ciracì (ITA), who springs forward from the backlines and ends sixth.

SUPER ROK: CICOGNINI AT LAST!
Throughout the whole final, many drivers are trying to steal the leadership of Cicognini, but nobody manages to. From the first row, Cicognini starts perfectly and has to defend himself, at first, from the New Zealander Hutton. After a few laps, Day (RAE) takes the lead but everything is useless because Cicognini is fast and concentrated, unbeatable.
On the fifth lap, the current champion Machado withdrew from the race after a contact with Martucci as well as Hutton, out after a few laps (14th lap).
In the final stage of the race, D’Abramo stands out. The 2017 Super Rok champion, despite a great experience and his speed, cannot overtake Cicognini, who stands the pressure, drives back his opponent (19th lap) and conquers the Title.
Jacobsson (DNY) ends behind the two Italians and takes advantage from the penalization given to Day (for disassembled front fairing). Martinello ends fourth, but he could have been one of the protagonists in the fight for the podium if he had not started from the backlines. The lady Rianna O’Meara-Hunt is the author of a great performance, always in the brawl in top positions and sixth under the checkered flag, despite three-seconds penalization (infraction at the start).

SENIOR ROK: COMANDUCCI AT THE LAST CORNER ON GAGLIANO’
The Senior reserves such exciting final that the heats defining the starting grid seem to be too easy. All the spotlights are now on the two absolute protagonists of the whole event in the Senior, Gaglianò and Comanducci. The two Italians are playing a leading role in the heats, with three and two victories respectively.
One of the heats is won by the best lady Tanja Müller (CHE).
The final, as already said, is within the two Italians’ grasp: Gaglianò and Comanducci spring forward from the first row and run a lone race with Gaglianò leader and Comanducci second.
The two gain a big gap from their opponents, immediately proving that the challenge will be decided in the last few meters. Comanducci follows the leader without trying to attack, studying every single centimetre of Gaglianò driving pace. The decisive overtaking is done at the last corner. Comanducci slips into the very short gap dividing him from his opponent and finally takes the lead.
The podium is completed by the lady Müller, very good at winning the fighting challenge with the couple of Polish drivers, Palmirski and Nadolski.
Senior is the category of the super competitive Ladies: besides Tanja Müller, also Tereza Babickova (CEZ), seventh in the final, Micalina Sabaj (POL) and Emma Delettra (USA) stand out brilliantly during the whole weekend.
SENIOR ROK OMP TROPHY.
The Trophy dedicated to the partner OMP, world leader in motorsport clothing, is rich in emotions and overtakings. The Indonesian Mahpud does a few mistakes forcing him to recover three times. At the finishing line Mahpud beats Zajac, author of a fantastic comeback from the eighteenth position. The Canadian Hornbostel closes the podium of the OMP Trophy.

SHIFTER ROK: BOSCO IS THE CHAMPION IN THE RACE LEAD BY SQUARANTI
The nineteen laps of the Shifter final are the most exciting laps of the last few years.
Squaranti does a perfect start from the first row while Bosco is forced to overtake Myers (USA) and Vita (ITA) to try to take the lead.
At the very first corners, two possible protagonists, such as the current champion Zemin (ITA) and the Super multi-champion Cinti (ITA) disappear from top positions.
After the first stages, Squaranti and Bosco stand out taking the lead and opening a gap from Myers, Vita, Tolfo (ITA) and Fusco (ITA). The latter proves to be the only one able to catch the two leaders and in a few laps, he gets involved in the fight for the victory.
On the eleventh lap, Fusco is taking the leadership from Squaranti and manages to gain the top position, keeping it, with a small lead over him, until two laps to go. On the 18th lap, Squaranti centers a perfect overtaking on Fusco and defends himself from his opponent with determination, while Bosco is immediately behind them.
The race seems to draw to an end with a defined result, with Squaranti leader, but at the second-last corner Fusco tries to make an impossible overtaking, he springs in the grass and puts Squaranti out of action, opening the way towards the success in the Superfinal to Luca Bosco. Bosco thanks him and conquers the second trophy of the Rok Superfinal, after the Title he won in 2017 in the Junior Rok.
The podium is completed by Myers and Tolfo. Fusco is excluded and Squaranti gains the best lap in the final.