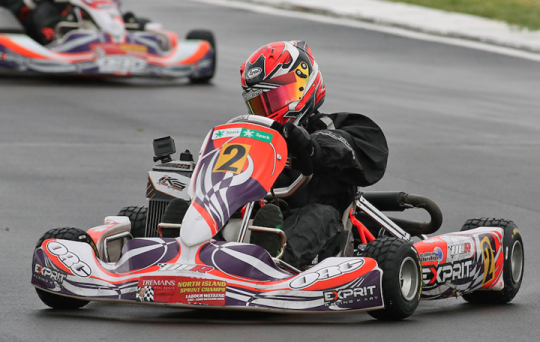 Stepping up at the South Island meeting, run by KartSport Canterbury at its Carrs Rd Raceway kart track, were Zac Christensen, Jacob Mitchell and Adam Godwin.

Hedge was the only driver at the North Island meeting to complete a class clean sweep (pole, and wins in both heats as well as the Pre Final and Final) in Junior Rotax, and finished third in Junior Yamaha behind Ryan Wood and Jaden Ransley.

Wood in turn added the North Island Junior Yamaha title to the National Schools' one he earned earlier in the year, and finished second to Hedge in Junior Rotax.

Connor Davison has his work cut out in one of the most competitive classes at the North Island meeting, Vortex Mini ROK.

Win the class title he did though, after sharing heat wins with fastest qualifier Blake Austin, winning the Pre-Final then leading for all but one lap of the Final while eventual runner-up Liam Sceats from Auckland and Clay Osborne from Hamilton disputed the other two podium spots until the chequered flag came out.

In other confirmed results from the North Island meeting Mark Elder was the dominant figure and won the Open class this year, Jacob Cranston won the Rotax Max Light title from Rhys Tinney from Hamilton, and Kiaihn Burt claimed his first major title in Cadet ROK.

Early on in the day Rotax Max Light looked like it was going to be a Scott Manson benefit, the Christchurch ace qualifying quickest and winning both class heats as well as the Pre-Final. It was fellow Christchurch driver Thomas Emmerson who ended up winning the Final, and with it the 2016 South Island title however, after Manson lost the lead when he ran wide on a slippery section of track early in the race.

Emmerson took the lead at that point and held it to the flag from a fast-finishing Caleb Cross, with Manson third and Ayden Polaschek fourth.