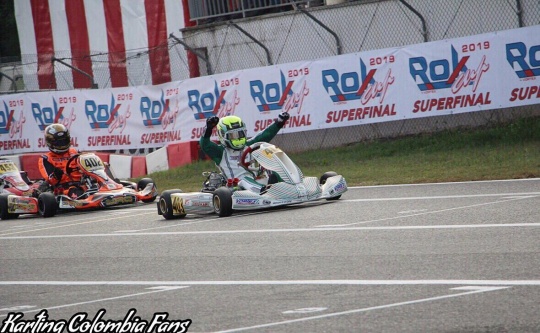 Author: Vroomkart International
Day full of thrills at South Garda Karting for the finals, which decreed the new champions of this intense season in the wonderful stage of the Rok Superfinal 2019.
MINI Rok - Alex Powell wins
Alex Powell (Energy Corse) wins and impresses the lot after a race fought from the first to the last lap against his teammate Dmitry Matveev (Energy Corse) and Jan Przyrowki (Av Racing), respectively second and third on the podium. In the early stages of the race it was a psychological war in the leading group, which then turned into a furious fight for the first position which the Jamaican driver in the Energy Corse team managed to make his own. Unlucky was Kai Sorensen (Manetti Motorsport), author of an extremely competitive weekend, set back thanks to a penalty. Completing top 5 were Francesco Marenghi (Revolution Motorsport) and Enzo Tarvanichkul (Baby Race).

Junior Rok - Federici by surprise
Daniele Federici (Zanchi Motorsport) takes home an extremely hard-fought victory over his main rival Pietro Ragone (Marra61), who for most of the race saw himself in the lead. In the final laps, also stimulated by the recovery of Micheal Barbaro Paparo (GK), Federici takes the lead from Ragone, and stays ahead, graduating as champ. For the second position, it was thus Pietro Ragone (Marra61) ahead of Micheal Barbaro Paparo (GK). Matteo De Palo (Kgt Motorsport) and the American Connor Zilisch (Revolution Motorsport) finished in fourth and fifth place.

Senior Rok – A clever Comanducci
Senior Rok literally saw a two-way fight for contending the title with Cristian Comanducci (PRK) and Giuseppe Gaglianò (New Technology Racing), one step ahead of everyone else. The two studied each other for the whole race to the sound of fast laps, until they reached the last lap, where Comanducci unsheathed a manual-worthy maneuver at the very last corner, managing to slip past Gaglianò just a few meters from the checkered flag. On the third step of the podium was Tanja Muller (New Technology Racing), author of a great race, while in fourth and fifth were Franciszek Palmirski and Kacper Nadolski, both with the Amo Racing team.

Shifter Rok – Heart-pounding race
In the most performing category, the pupil of Alessandro Manetti wins a final full of emotions in the most incredible way. Starting from pole, Luca Bosco (Manetti Motorsport) manages to maintain the leadership against Federico Squaranti (WK Corse), but soon after, he is overtaken by the latter and by Giuseppe Fusco (Renda Motorsport). The fight gets tight until the last round, where Fusco tries a risky maneuver by going with two wheels on the grass, trying to overcome Squaranti, but without success, while Bosco, crossing the trajectory, manages to place himself ahead to take home the victory. The young driver in the Manetti Motorsport team confirms the good things seen last week, winning the autumn trophy. On the second step of the podium is James Myers (CRG USA), third Edoardo Tolfo (F.D. Motors), with Alessandro Buran (VRK) and Mattia Vita (PCR) in fourth and fifth.

Expert Rok / Plus - Prokscha new champion
In the Expert Marcel Prokscha (RS) wins after a lackluster start, but grabbing the spotlight thanks to a series of passes. Second on the podium was Renato Jader-David (Rok Cup USA) followed by Wojtek (D&D Motorsport Poland). Fourth and fifth were Nicola Cogato (Jesolo Race) and Joe Crupi (Rok Cup USA). 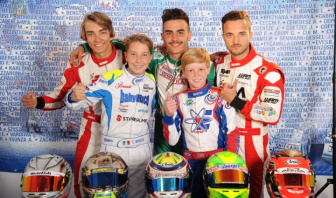