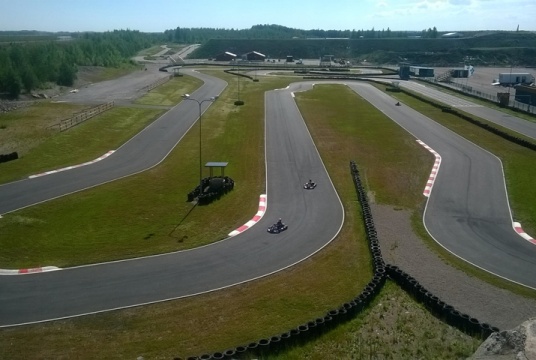 Author: Vroomkart International
Finland has a strong motorsport tradition: the legend of flying Finns goes through different categories from karting to F.1 and rally. Now a new generation of skilled drivers is being brought up on the circuit in Vantaa.
Owned by the city of Vantaa, but managed by Keimola Formula-Kart Club, the Vantaa Circuit is situated in an area called "Vantaa Speed Center". This area is so named because there is a motocross track and RC track there and within two years a 3 km-long racetrack for cars and formulas is going to be built in the same area. The racing tradition of this city it is also given to two real flying Finns who were born here: Mika Salo and the two times F.1 world champion Mika Häkkinen. The City of Vantaa has made that monument for the latter when he won the two titles and there also is a Häkkinen square with a dedicated monument in the karting facility.

The track is new, but they are working hard to make it an international track two years time: In autumn 2016, the track will be changed to comply with the CIK-FIA international standards, in order to host international event in 2018. It has a lighting system that for night races, and a Mylaps timing system with 3 sectors and X2-timing will be there in summer 2017.

The location is one of the best in Europe: next to Helsinki-Vantaa Airport, so not only can you see the karts, but you can also see the airplanes from the track because the airstrip is really close, only 100 meters from track! If you want to get there by sea, the Port in Helsinki is only 15km from the karting facility. Nearby, 7 km distance there are hotels and the biggest shopping centre in Finland, "Jumbo" with restaurants, cinemas and wellness centres.

Not only races: The Vantaa Circuit wants to be the point of reference point for all karting fans who want to have fun, enjoy themselves. So, you have rental karts, TonyKart 401 chassis powered by Rotax Junior engines that will be there soon. By the end of this summer everything will be completed with a cafe-restaurant called "Garage", and a karting shop that sells magazines, spare parts and clothes.