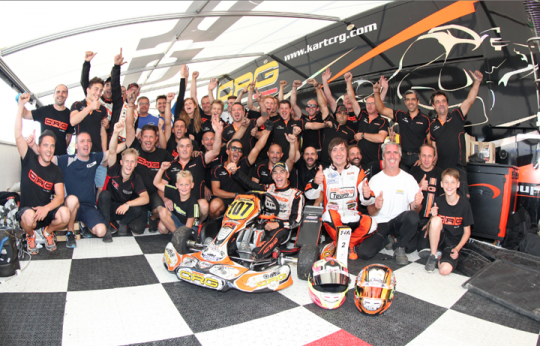 Press Release by: CRG Racing Team
CRG reached a series of objectives in the final round of the European Championships in Genk, which brought the Italian outfit once again on top of International Karting. A great level of competitiveness has been displayed in all categories and good performances have been put in by all drivers of the Racing Team.
CRG and Tinini Group reached the enviable haul of 41 victories in European CIK-FIA Championships thanks to the two titles respectively won by Pedro Hiltbrand in OK and Fabian Federer in KZ2 in Belgium at Genk.

The result of Genk – an important one in OK and KZ2, big target missed by a whisker in OK Junior out of the four titles available – confirmed the excellent performance of CRG chassis and engines, alongside the competitiveness of the whole lot of drivers and technicians of the Racing Team.

The goal set at the beginning of the season has been reached, while waiting for the grand finale of the two World Championships KZ-KZ2 to be held in Kristianstad next September 4th and the OK-OK Junior’s one scheduled for next November 19th in Bahrain. CRG will be all set to complete a season that is already been very positive.

In Genk, alongside the drivers fighting and taking the win, all other CRG drivers – a total of 19 protagonists of the Racing Team in this round of the European Championships – have to be praised. In KZ, Puhakka and De Conto ended on the podium of the Final with their works TM engines, but Flavio Camponeschi has also been among the front runners on Iame engine. 2015 World Champion Jorrit Pex has been very strong after a troubled beginning of the season. Unfortunately, he was involved in an incident with Camponeschi in the Final, which prevented both to fight for the podium. Regarding CRG drivers, 2014 European Champion Andrea Dalè, run a strong Final ending 14th after some problems early on.

In KZ2, Fabian Federer repeated the victory scored in 2011 on CRG chassis pushed by Modena engine run by team SRP. Stan Pex of CRG Holland was also in the fight for the final victory, but the Dutch driver had to settle for P4 in the Final, which earned him a honourable second place in the classification. Felice Tiene on CRG-Tm with engine by Galiffa also run a solid race ending the Final in seventh place at the end of a comeback started from the last position of heats due to some clutch  issues. The German driver of TB Motorsport Dominik Schmidt was ninth, the young Dutch Max Tubben of CRG Holland was eleventh, while his team mate Andreas Johansson was 17th. The Japanese Fuma Horio was 21st on CRG pushed by Tm engine by Galiffa, Fabrizio Rosati 27th on CRG-Maxter, as they both found their place among the finalists out of the 71 drivers on track in the category. The Dutch driver of CRG Keijzer Racing Dylan Davies, the Swede of CRG Holland Benjamin Tornqvist and the Dutch Lorenzo Van Riet, had an unlucky weekend and were handed a 10s time penalty due to the dropped front fairing, which did not allow them to take part in the final, as happened to the Swiss Rudolf Rhyn of RSP Racing and to the French Pierre Lefebvre.

The German Hannes Janker has been very quick in OK on CRG-Parilla. He set the fastest lap in qualifying, won heats and was fifth in the Final, a result that contributed to the top 5 finish of three CRG and Tinini Group drivers.  Hiltbrand (CRG) was in fact second and new European Champion of the category, Joyner (Zanardi) was fourth in the Final and second in the championship. The Portuguese Andriy Pits (CRG-Parilla) run a solid Final ending 25th after a great Prefinal that he closed in P7. The Finnish driver Paavo Tonteri has been unlucky in this occasion. He had been a protagonist of the Championship but was forced to an early retirement in the Prefinal after the eight time in qualifying. The German Luka Lippkau of TB Motorsport has also shown a good competitiveness, but was disqualified from the Final due to an unwanted track cut on the humid tarmac at the start.

In OK Junior, CRG Racing Team fielded eight drivers, all on CRG-Parilla. Dennis Hauger had to win the Final to get the title, and he was very close to making the deed after leading the race early on. Credit where credit is due, as the young driver closed his effort in sixth place of the Final, which earned him the fourth place of the Championship. The British Teddy Wilson has also been very competitive and ended the race of Genk with his maiden podium in a European Championship.The competitiveness of CRG drivers was also confirmed by the Spanish rookie Kilian Meyer who was 11th in the Final and always among the quickest, as happened in the Prefinal where he was third behind Hauger. The other drivers could not find a place in the Final. Namely, the French Pierre-Louis Chovet was 22nd in his Prefinal, the Canadian Antonio Serravalle and O’neill Muth were forced to the retirement in their Prefinal, while Esteban Muth was stripped from the deserved chance of competing in the Final due to a 10s time penalty. The Brazilian Gianluca Petecof could not get access to the Final either even if his weekend was positive anyway. Tara Eichenberger of X-Rei Motorsport managed to run the Final instead, and ended 27th, while Kas Haverkort of CRG Keijzer Racing had a difficult qualifying but eventually managed to recover getting close to finding a place among the finalists.

Dino Chiesa, Team Principal CRG: “The Final round of the European Championship in Genk has been absolutely positive for CRG colors in all categories. These results give us the awareness that we have some important chances in the World Championships. In KZ the engine change allowed Simo Puhakka and Paolo De Conto to improve their performance. De Conto had already shown a different pace in the recent DKM race, a result that was confirmed here. Our two drivers will certainly be protagonists in the forthcoming World Championship, alongside Flavio Camponeschi that has shown great speed. In KZ we have three very strong drivers for the World Championship, but we must not forget that two thirds of the podium in Genk was ours… In KZ2, we got to Genk well aware of the chances of Federer and Stan Pex. The title eventually went Federer’s ways, thanks to the results in the heats, while Pex hit some troubles in the Final. My compliments to Federer who managed to win his second European Title. In OK we also had two title contenders: Pedro Hiltbrand and Tom Joyner. Perhaps, we could have closed the games earlier but unfortunately Tom Joyner was involved in an incident at the last lap in Adria. We played it out in the final round and Hiltbrand has been flawless in his run to the title. We have always been competitive also with Hannes Janker and Paavo Tonteri. I am happy for Pedro because he eventually managed to win an important championship, and also because Tom has confirmed once more to be among the absolute best. In OK Junior we are really satisfied by Dennis Hauger’s performance in his maiden year in the category. He turned out to be a protagonist, has fought for the European Championship and is still fighting for the DKM title. Hauger ended the European Championship in fourth place, but he might as well have won it: Dennis is certainly the rookie of the year. We entered in this category that was dominated by our rivals and now we are among the main protagonists, not only with Hauger. We are very competitive also with Teddy Wilson and Kilian Meyer, that has been very quick in his first international race, as did Esteban Muth. We fielded eight drivers in Genk, some have been delayed by the results in qualifying, but they have all been very competitive. The material is very good as shown by Hauger and the other drivers. I would like to thank not only those drivers fighting for the victory, but also all our drivers, the team and mechanics as the whole squad has been exceptional in reaching these goals”.