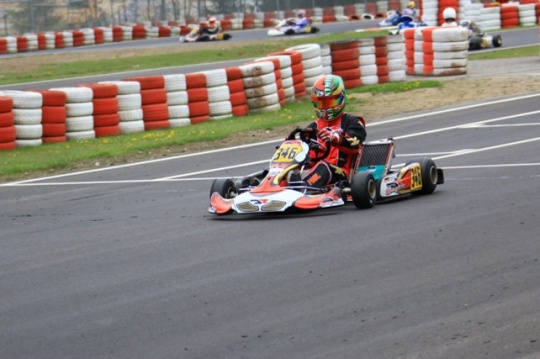 Last weekend the time had finally come – the DKM season 2016 started at the Prokart Raceland in Wackersdorf. Within the framework of the highest German kart series the DMSB Shifterkart Cup is taking place for the first time and enjoyed a strong international interest. All in all, 34 drivers stood up to the challenge on the difficult track in Upper Palatine. One of them was Dresden resident Maximilian Paul. The youngster started in the shifterkart class for the first time in 2016.

“I felt comfortable in the new class immediately. The switch from the X30 juniors was a little easier than I had imagined”, says the 16-year-old.
The supported driver from the ADAC Saxony e.V. looked back on a successful season preparation before the start of the DKM: The young driver already proved himself on international terrain at the WSK Super Masters Series.

He started in Wackersdorf accordingly confident: “I feel really good and can hardly wait for the start.” The DR kart driver was able to convert his positive attitude into significant results – Maximilian already was among the favorites after the free trainings. The NKS for Racing team protégé was able to confirm these ambitions during qualifying. As the fastest driver of his group he drove among the forefront and ended up on the outstanding second place on the overall list of rankings.

The weather was great throughout the entire course of the weekend – the conditions on and off the race track were ideal for everyone involved. Maximilian Paul was therefore able to drive at the front of the KZ2 drivers without any problems during the heats as well. Due to a victory and a third place he secured a good starting position for the final races on Sunday as the third driver.

He was then able to defend this during the first ranked race and fought a thrilling duel for victory. After 21 laps Max crossed the finish line as best German driver on third place. “Everything’s going well so far, I feel really comfortable in my kart and am going to try to build on this in the decisive race”, said the rookie before the last ranked race and was immediately able to tie in with his performance. He ended up in the cup ranks again, on fourth place, and secured third place on the overall list of rankings.

“The new class makes the DKM even better. It was a successful entrance for me and an overall great weekend here in Wackersdorf.  I’d like to thank the entire team for the great support. Now I’m looking forward to my next race and am going to try to keep up this performance”, the Dresden resident summed up on Sunday. Maximilian is already going to be able to show his strength again next week at the ADAC Kart Masters in Hahn. He is aiming for the front ranks again on the Hunsrückring.