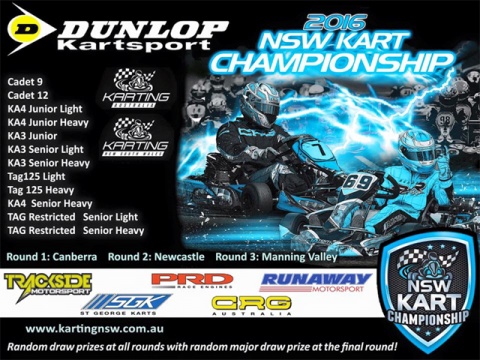 Press Release by: Karting Australia
Canberra Drivers are preparing for their toughest challenge so far this season with this weekend’s first round of the NSW State Karting Championships at Circuit Mark Webber, Fairbairn Park.
Young drivers, Sebastain Ruiz (Cadet 9, for drives under 9 years old) and third generation driver Zachary Bates (Cadet 12, for drivers under 12 years) will have tough competition from across the state as they look to start the three race series with a strong performance at their home track. Ruiz was dominant in the shakedown event last month, while Bates finished 2nd to Kent Fias- Ayon.

Grenfell’s Thomas Sargent is keen to continue his successful record in Canberra, The junior driver is preparing to travel to the UK later this year for a test with a European karting team, and spent last weekend testing at the circuit, trialling a new kart chassis, which will match the kart he will be testing overseas. Canberra’s Mia Bolton and Cameron Ward will be hoping they can challenge Sargent and defending NSW State champion Benito Montalbano (Prospect, NSW) for the victory in the KA4 Junior victory.

In the senior classes, Jamie Prendergast is hoping that he can repeat his March result and claim the win, Lochlan Chancellor in KA3 Senior will look to continue his good recent form, while in the 125cc classes, Rob Hogan and James Ordish will lead the local charge.

Qualifying for the senior classes will commence Friday 12pm with the first round of heats scheduled to commence immediately after. Racing will continue across the weekend with the juniors and cadets joining the Seniors on Saturday and Sunday, racing commencing from 9am on both days, with spectator entry free.
The Canberra Kart Racing Club will officially name their Fairbairn Park Circuit in honour of 2015 Federation International De L’Automobile (FIA) World Endurance Champion and nine (9) time Formula 1 Grand Prix winner Mark Webber on April 29.

Former members of the Canberra Kart Racing Club along with members of the public are welcome to attend the naming ceremony, which will commence at 4pm Friday 29 April.