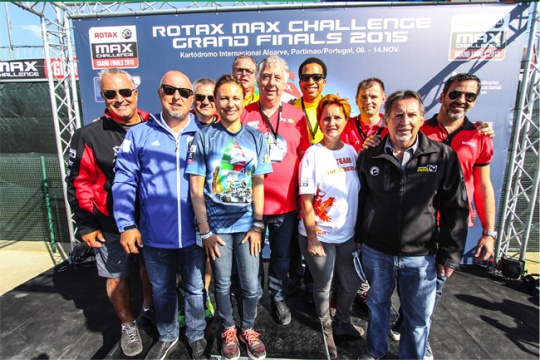 “As we all came together for the Grand Finals in Portugal, the other distributors and I always share a similar vision,” explains MAXSpeed Group President Richard Boisclair. “We came quickly to the conclusion that this program is going to help all markets for Rotax. We are pleased to make these significant partnerships with people we have been working with since the inception of MAXSpeed Group. This is a win-win situation for all of us.”

“We had numerous Australians in Las Vegas for this year’s US Open finale singing the praises of such an outstanding and professional event put on by MAXSpeed,” adds Ian Black of International Karting Distributors, Australian distributor for Rotax. “We are proud to be associated with this new alliance, and we look forward to sending more top Australian talent to the US Open series.”

“It is with great pleasure that France joins MAXSpeed in the new US Open partnership program,” notes Bertrand Pignolet, CEO of Sodikart. “The US Open drew numerous international competitors during their first season, and with great success.”

“MAXSpeed has done an incredible job promoting the new US Open series,” adds Michel Boisclair, President of SRA Karting, Canadian Rotax distributor. “To now have support and partnerships with countries around the world, including Canada, the series will truly offer an international platform for Rotax racing and our racers.”

With many international Rotax MAX Challenges awarding series champions tickets to the Rotax MAX Challenge Grand Finals, entrants from countries noted above will receive registration to compete at the US Open series finale, set for November 1-5, 2016 at the Rio All-Suite Hotel and Casino in Las Vegas, Nevada, as determined by individual RMCs and MAXSpeed, as well as tickets to the black tie banquet on Saturday evening in Las Vegas.