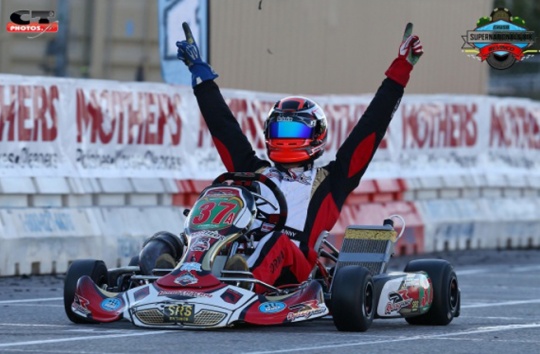 Press Release by: DR Racing Kart
DR red-black-white colours were sported on the top of the podium by DRT Racing driver Danny Formal at the electrifying SKUSA Supernationals XIX in Las Vegas.
Formal, who raced on the occasion for DRT Racing and set his sight on victory after coming short last year, was almost perfect throughout the weekend showing a truly dominant form. The driver originally from Costa Rica returned to the USA making a huge impression in S1 Pro class already from the early goings. In qualifying, Formal stopped a super lap of 49”655, almost 0”3 faster than second best Dreezen.
After winning all three heats in quite a dominant fashion (the fist and the third taken by over 2”), Formal went on to put a stunning performance also in the Final.
The DRT Racing driver kept the lead after a flawless start and soon pulled a gap on the group of chasers, taking a light-to-flag victory. By the chequered flag, Formal had 3”7 margin on the chasers to grab a truly commanding victory after stopping the fastest lap of the race with 49”296 completing an almost perfect weekend – also stopping the fastest lap in all sessions but one.