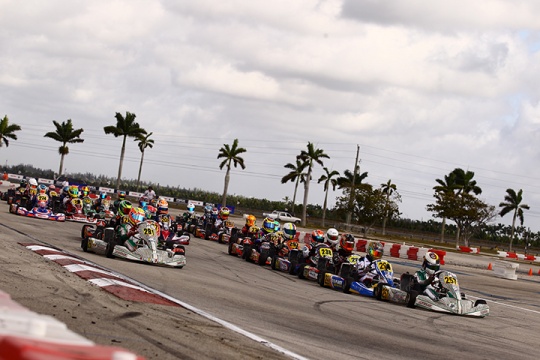 Jeremy Fairbairn quickcly took the lead of the 25-lap final and defended it until the chequered flag. Tyler Gonzalez and Arias Duekmedjian traded places in second place, with Gonzalez that took home a second place win.

Prema Powerteam driver Juan Manuel Correa had a bad start, causing a back-up of karts behind him, including Gary Carlton. Jeff Kingsley got away from the pack with Correa in second and Carlton able to earn the third spot: Rubens Barrichello showed promise early, but did not have the pace to keep a much faster Carlton behind him as the Formula K driver was finally able to get back all of the spots he lost early.

James Egozi led all 18 laps in the Final despite constant pressure from Emerson Fittipaldi and Miguel Costa. Fittipaldi and Costa fought hard for that second spot, eventually going to Costa in the final laps.

Canadian Dale Curran got the jump over Luca Mars, who slipped to third from his second place starting spot behind Reece Gold. With Curran well out front and Mars comfortably in second, the race on the track was for third between Gold and Arseneau: the two drivers bumped and banged in the final corner, with Gold holding the edge earning the third spot.

Ryan Norberg controlled the final from lap seven, when he stole the lead from Arthur Leist, on to take the win. During the move of Norberg, Leist slipped to third allowing Garrison to move into second.

Michel Aboissa had a perfect weekend in Masters MAX winning over Christophe Adams, who was able to steal the second spot from Luis Schiavo. Italian former Nascar driver Max Papis finished in fifth.