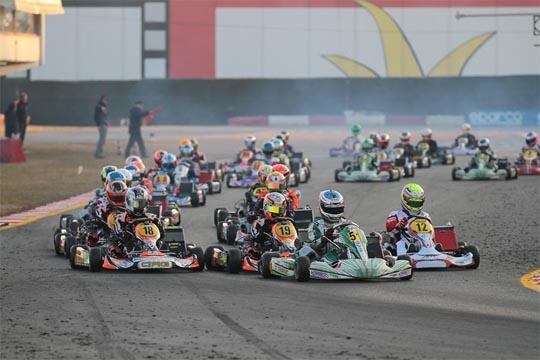 Press Release by: South Garda Karting (Lonato)
In the photo: Marco Ardigò first at the start of 2012 Winter Cup in KZ2.

The race has more than 250 entrants in the three categories -  KZ2, KF and KFJ -. At the start many international kart champions, all ready to put on a great sports show. The programme of the event starts on wednesday 13th February with free practice and scrutineering.

Lonato del Garda (Brescia - Italy). The 18th Winter Cup is ready to put on its show for its fans in the opening event of the season on the South Garda Karting racetrack in Lonato. Plenty of entrants in all the three categories for the traditional event of the beginning of the racing season.

At the start many international kart champions in the top performing category, the KZ2 with gearbox, but many other skilful drivers are present in the junior categories KF junior and KF, with the participation of many new names together with rather experienced drivers.

It is important to point out the great work done by South Garda Karting for this first event of the year: the goal is giving an international appeal to this event.

The programme of the 18th Winter Cup starts on Wednesday 13th February with free practice, with karts obliged to install transponders and race numbers  to allow an actual timing in the interest of the attendance and of all the participants. Scrutineering starts on Thursday 14th February for the KF category, while scrutineering for the KFJ and KZ categories are scheduled for Friday morning.

Qualifying starts on 15th February at 10.50am, while in the afternoon from 12.50 there are the first qualifying heats which will continue until Saturday evening. On Sunday 17th February the thrilling final phase: after the second-chance heat and the drivers' presentation (h 12.15pm), at 01.30pm Pre-finals and Finals from 01.30pm.

Great duels are expected in all the categories, in an event which, once again, presents itself at top levels thanks to the participation of all the major manufacturers and teams, all ready toenrich a winners' list which dates back to 1986 and has as first entry the F1 driver Tonio Liuzzi, the young winner of that year's 100 ICA category.

In KZ2 there is a rather large number of favourites, beginning with Tony Kart which, besides Dreezen, fields Marco Ardigò, the KF1 World Champion Flavio Camponeschi and Mirko Torsellini, who will have to deal with top level teams. CRG presents Fabian Federer, while Davide Forè, always on CRG, will race for the Polish team DTK. Among the champions participating in this category, at the start also Ben Hanley with Art GP, Bas Lammers with Praga, Paolo De Conto and Roberto Toninelli with Birel, as well as Arnaud Kozlinski with the Birel-AVG team, Riccardo Negro with DR, Yannick De Brabander at his debut with Maranello, Antony Abasse with Sodikart.

In KF most of the attention is concentrated on Max Verstappen's performance with CRG, recent winner in KZ2 in the first round of the WSK Master in La Conca. George Russell is expected to perform well at his debut with Birel, Lance Stroll and Tom Joyner with Chiesa Corse, Karol Basz with Tony Kart, Armand Convers with Kosmic beside the home champion LucaCorberi at the debut in this more powerful category after winning the KF3 world cup last year. In the race also other protagonists and first rate teams such as LH Racing Team, Energy Corse, New Force, Art GP, Ricky Flynn, Ward Racing etc.

Among the new talents of the KF Junior category, there is also Giuliano Alesi, son of the Ferrari champion Jean Alesi, who starts his apprenticeship in karting. Absloutely gripping 6the family 'feud' between the two Lorandi brothers Alessio and Leonardo, who race in the same category this year.

All the information on www.southgardakarting.it