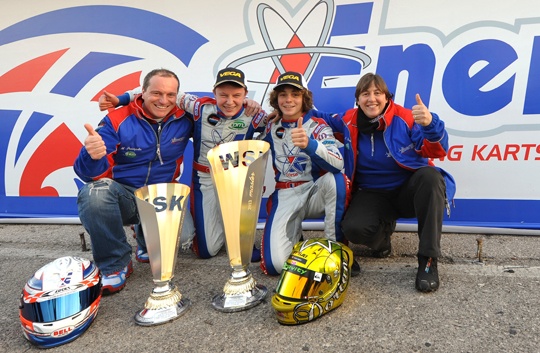 A victory for Boccolacci and a convincing performance for Snell in KF, a third place for Parker Thomson in KF Junior and remarkable performances for Juodvirsis in KZ2 at the opening round of the WSK Master Series... As is his habit at the beginning of each season, the Energy Corse team has achieved its goal on the La Conca circuit, revealing its determination to be once again among the teams capable of fighting for major international victories in 2013.
Photos KSP
Energy Corse is definitely not a team that rests on its laurels. Soon after the end of the 2012 season with a last victory at Las Vegas, the Italian team went back to work to prepare at best for this new year. Its professionalism and know-how, as well as its capacity to support drivers in their path to the top, have worked miracles again.

- Dorian Boccolacci (Energy-TM), who set the second absolute time in timed practice, drove a fantastic race on the attack and crossed the finish line of the KF final in the lead. There is already a perfect synergy between the French driver, who has joined the "Lotus F1 Junior Team" programme, and his team!

- 11th in the pre-final and 12th in the final, the Russian Vasily Romanov kept a fast pace, while his compatriot Egor Stupenkov staged some brilliant recoveries in the heats, but paid dearly his retirement in the pre-final. As for Sam Snell (Energy-Parilla), he battled with the leaders throughout the race and scored the points attributed to the 3rd place in the pre-final and to the 6th in the KF final.

- Congratulations to Isac Valtonen and Alessio Polara (Gandolfi Ennio Racing), who drove excellent pre-finals and were able to enter to the Juniors final and to acquire some more experience. The best result came from Parker Thomson (Energy-TM), who drove a flawless race on his debut in KFJ. After an excellent performance in the pre-final, he confirmed his state of form by ranking third in the final. Energy Corse's advice has worked out perfectly!

- Michele Di Martino (Jedi Racing Team) and Gaetano Di Mauro competed on their Energy chassis in the KZ2 category, as did Simas Juodvirsis. The European Champion has just renewed his confidence in the Energy Corse team and felt no inferiority complex against the best KZ1 drivers. Indeed, he was 10th in Saturday's final and started 6th in Final 2, before he was forced down the order to 13th after a few race incidents.

- Finally, a little reference to Freddie Hunt. The son of James Hunt, World F1 Champion in 1976, he has chosen the Energy brand to satisfy his passion for motor sports and karting in Argentina, where he can rely on Silvestre Trobbiani's assistance (Energy Argentina).

Comments by Michele Panigada (team manager)
"We are very satisfied with this first race of the season for several reasons. Dorian Boccolacci has succeeded in winning already his first race in KF. It is a great result, given that he has joined our team only recently. His team mate Sam Snell has shown once again that he will be a force to be reckoned with this season. In KFJ, it was incredible to see the Canadian Parker Thomson on the third step of the podium, considering that he is not used to competing in Europe and has practically no experience in that category. Once again, our karts have performed well in all the categories, from KF to KZ. I would like to thank the whole team and all our partners and congratulated them on this race, which enables us to look to 2013 with optimism".