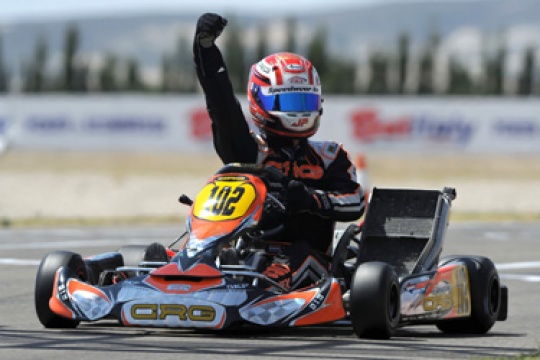 Since the launch of the WSK series, CRG has won a number of very important titles in these popular and hard-fought Championships. At the final round held at Zuera, CRG conquered two of the four titles at stake: Alex Palou (CRG-BMB) triumphed in KF3 and Jorrit Pex (CRG-TM) in KZ1.

As the latter noted, these successes are all the more important because they have come at the end of a Championship held on four different tracks, in conditions that are never identical. And in all cases, CRG chassis were up to expectations.

KZ1: Another Success for Pex and CRG
Once again, Jorrit and CRG have reaped the benefits of their cooperation, which started several years ago. In addition to recently winning the European Championship in the most hard-fought class of international karting, the Pex Racing team and their driver experienced a fantastic weekend at Zuera. The Dutch driver set the pole position, in addition to winning the two finals on Saturday and Sunday, which allowed him to add his name to the list of WSK Euro Series winners. Pex and his CRG chassis showed a high level of performance, but also managed tyre wear perfectly, which was a key element at the Spanish meeting. Jonathan Thonon and Davide Forè (CRG-Maxter/Tecsav), who were 4th and 6th respectively on Saturday, were aiming for a podium on Sunday, but some technical problems disrupted their performances. Andrea Dale and Fabian Federer entered the top 10.

KZ2: Victory Vanishes
Jordon Lennox-Lamb led an attack race and crossed the finish line of Final 1 first. The Briton was therefore back in the race to the title, but he was bumped into during Sunday's final and lost all his chances. Too bad, because Jordon was very fast behind the wheel of his CRG-Maxter prepared in-house. The performances shown by Alvaro Gomez and Julio-Andres Martinez, members of the Jam Kart Team from Tenerife, are also worth mentioning.

KF2: Tiene Becomes Vice Champion
Showing CRG colours on the podium has become a good habit for Felice Tiene, who ended his WSK participation on a high note. Despite a problem in one of the heats, the Italian climbed up from 12th to 4th in the pre-final and just missed out on victory in the final race. In second position with the second fastest lap time in the race, Tiene (CRG-BMB/KVS) was also second in the 2012 WSK Euro Series classification. Tom Joyner (LH-BMB) was not as successful despite his high level of performance. The presence of the Danish driver Nicolaj Moller-Madsen - who is discovering his new environment - in the team, in addition to the very encouraging times set by the French female driver Ingrid Girard, are also worth stressing.

KF3: Palou In Control of the Situation
Alex Palou (CRG-BMB / KVS) came to Spain as the leader of the WSK Euro Series and left it with a title in his pocket! "I would like to thank all the CRG team for their great work because results have been excellent since the beginning of the season", the Spaniard commented at the end of the race. "Here again, I had the right kart to win. I won pre-final B, and when I realised that a second place was largely enough to conquer the title, I did not take any risks during the final. For me, a WSK title in a difficult class such as KF3 really means a lot". Congratulations also to Zachary Claman Demelo, Vitor Baptista (CRG-BMB) who was 5th in his pre-final, and Georgy Antonov (CRG-Parilla/AB Motorsport Racing Team), 8th in the final.