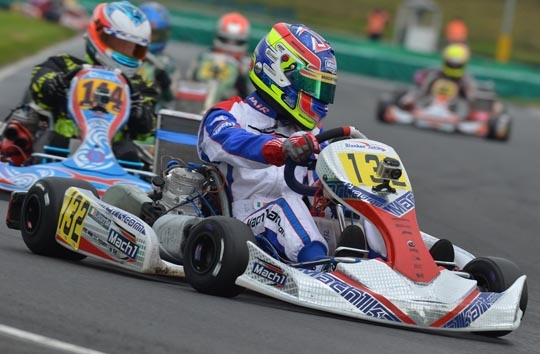 Press Release by: Mach1kart
It’s Last weekend, Mach1-Kart factory driver John Norris started at the WSK Final Cup in Italian Castelletto Di Branduzzo and was able to satisfy in the strongly manned KF2 class. In the end, he lacked the necessary ounce of luck though. The team additionally started at the KTWB in Wackersdorf and achieved two daily victories.
The WSK Final Cup marked an international top event in the racing calendar at the end of the season once again. Mach1-Kart was represented in the KF2 and managed to stand their ground against the strong international competition. At his debut in World Series Karting, factory driver John Norris was able to drive as fast as the top drivers from the beginning and highlighted his performance by sensationally coming in third during qualifying. “Everything’s going perfectly so far. Our material is on a very competitive basis and I’m excited to see how we’ll do in the Heats”, said John confidently.
In addition to great ninth and fourth places during the Heats, Norris unfortunately also had to register a falling out after an accident, which made him fall back to eleventh place in the overall list of rankings. In the turmoil of midfield, he then fell back a couple of positions during the starting phase again and only made it out of the first lap on 25th place. Until crossing the finish line John managed to fight his way forward again though and came in 17th. The finale began much better then; the Irishman had gone up to 11th place after only a couple of laps and was heading for the top ten. But towards the middle of the race his engine power decreased considerably and he had to forfeit the race five laps before the end. Despite the disappointment regarding the premature falling out, in the end the joy about the great performance despite such strong competition prevailed: “In the WSK everyone drives very tough, but fair. The level of performance is correspondingly high and one cannot afford to make mistakes. I’m all the more glad that we were able to drive in the forefront. Unfortunately the technical defect prevented us from achieving a countable result in the end.” Team leader Martin Hetschel was also able to draw a positive conclusion: “I think we can be very content with our first WSK-performance. We did a good job and managed to impress on an international scale once again. Our chassis worked perfectly under high grip-conditions and we belonged to the fastest drivers throughout the races.”
At the same time the finale of the Kart-Trophy White-Blue in Wackersdorf paralleled the WSK Final Cup. There, Toni Greif (KZ2) and Simon Wagner (Rotax DD2) started in Mach1-Karts. Greif, who finished the ADAC Kart Masters-season on fifth place, achieved the daily victory in the shifter kart field consisting of 25 men by coming in first and second. Simon Wagner also experienced a successful weekend. The youngster started with the Mach1 Rotax DD2 Grand Final-chassis and achieved a daily victory as well.
In a few days, the German chassis manufacturer will already be travelling to their next race in Belgium. The finale of the German Kart Championship will be taking place there and John Norris still has the chance to achieve the vice championship title at the highest German Kart rating.