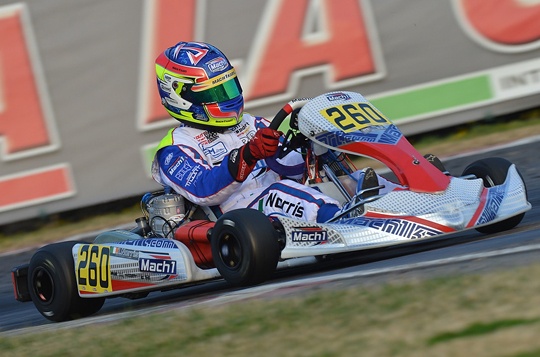 With the beginning of the WSK Euro Series in LaConca and the Tropheo Andrea Margutti in Lonato, Mach1 Kart visited two top-class international events during the past weeks and didn’t have to hide behind their strong competition. In the end, the German Chassis manufacturer established itself in the top five.
Stressful weeks lie behind the Mach1 Motorsport Team. They were guests at the beginning of the WSK Euro Series in LaConca, taking factory driver John Norris and young Norwegian Nicolai Hagenaes with them. After his great performance at the Lonato Winter Cup, Irish Norris was able to tie in with this achievement in South Italy and established himself in the front midfield of the strongly contested KF-category from the beginning. Finishing qualifying on 39th place, he improved his position during the Heats up to 18th place and thereby managed to enter the finals directly. After a falling-out, he had to finish the pre-final prematurely though. The finale went considerably better then: From the end of the field, he fought his way forward to the impressive 19th position. His team mate Nicolai Hagenaes started at the juniors and was able to gain international experiences once again. After finishing qualifying on 52nd place, he got faster and faster during the Heats and improved his performance significantly. On Saturday evening, the Norwegian was on the great 29th place and therefore had every chance to gain entrance to the finals during the pre-final. Unfortunately, due to the quarrels in midfield, he lost valuable positions and missed qualifying for the finals in the end. Team leader Martin Hetschel was very content nonetheless: “Both of them have shown great performances. John was fast as usual and made a name for himself in this strong field. I was especially excited about Nicolai’s performance; he’s learning very quickly and has done quite a leap throughout the past weeks.”

Only a couple of days later, the team started at the next race. On the South Garda Circuit, the 24th edition of the Tropheo Andrea Margutti took place. John Norris belonged to the fastest drivers of the KF once again and emphasized that the current Mach1 Chassis is a true allround talent. Under most diverse track conditions, it provides the best possible performance for the driver and therefore plays a big part in the success. Norris had a great start by finishing qualifying on 8th place and was very fast during the Heats as well. He started into the pre-final on Sunday morning from 11th place. Unfortunately, a falling-out during this race threw him back considerably; he then had to prematurely quit the race due to an accident that wasn’t his fault. He then left his mark on the finale though. From the last starting row, he fought his way forward through the strong field with top times and came in on the sensational 5th place. “What a race,” rejoiced Martin Hetschel at the finish line. “John drove as if he’d been unchained, our Chassis worked perfectly, without the incident during the pre-final, we could have driven for the overall victory.” Norris’ team mate Lucas Speck also started. The reigning ADAC Kart Masters-Champion gathered momentum quickly after his winter break and entered the finals too, after coming in 3rd at the repechage. He finished these on 26th and 22nd place respectively.

Next to the two strong KF-drivers, Toni Greif also started in Lonato, at the shifter karts. Just like Lucas Speck, this was the first race of the 2013 season for Greif. Unfortunately he lagged behind the front drivers by important tenths of seconds during qualifying. He then gathered momentum during the Heats and the repechage and finally managed to enter the finals on 33rd place. He gave it his everything during these then and finished the big final on 21st place.

Martin Hetschel experienced these weekends as proof for his team’s good work: “I really have to praise everyone. All of them have worked really hard and made it possible for us to stand here like this. Our Chassis works really well, I can hardly wait for the start of the season in Germany.”

Before it’ll get serious on native ground, the team will first drive to the second ranked race of the WSK Euro Series in Spanish Zuera.