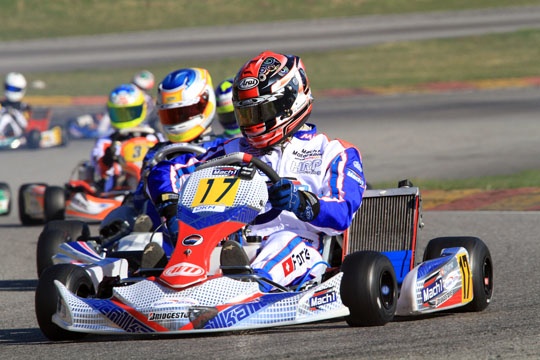 Press Release by: Mach1kart
After gaining the vice Championship title last year, the German chassis manufacturer Mach1 Kart wants to reach for the crown this year.
The kickoff in Ampfing already went very successfully and the team is currently on second place on the overall list of rankings.

Everything is going in quick succession for the Mach1 Motorsport team. After appearances at top-class races in Belgium, Italy and Spain, it now became serious on home ground as well. The German Kart Championship’s kickoff took place in Bavarian Ampfing and four drivers started for the Mach1 Motorsport team. Factory driver John Norris was the fastest driver right from the beginning. He drove the sixth fastest time during qualifying and ended up on seventh place after the Heats. He showed a great catching-up race during the first race then.
From the start, he fought his way past his strong competition and managed to jump to second place after 24 laps. “This was a great race for us. The kart worked perfectly and perhaps even more would have been possible,” said Norris at the finish line. During the second race, he unfortunately wasn’t able to tie in with his great performance of the same morning. John had to fend off hard attacks from his opponents and fell back to seventh place. Nonetheless, he defended his second place in the Championship ranking and did justice to his role as a favorite.

Manuel Valier proved to be in top shape during his home race as well. The Munich resident impressed by coming in fifth during the Heats and managed to tie in with this performance during the finals. By coming in tenth and twelfth, he belonged to the fastest German drivers and is currently on seventh place on the overall list of rankings. Marco Forrer on the other hand had some bad luck. The Swiss was on the same level as his team mates but was involved in several accidents during the races and was therefore stuck in the chasing field. Team leader Martin Hetschel was quite content with his team’s performance: “Of course it could always be better. Our material has worked very well though. Our work of the past couple of months is obvious and it’s great to work with this team.”

Young Norwegian Nicolai Hagenaes managed to continue his positive trend of the past weeks. During his first race on the challenging 1.063m track, he became faster and faster and started into the first final on Sunday from 21st place. He gained a couple of positions during the starting phase already and established himself in the chasing field. At the finish line, Nicolai came in on the great twelfth place. He managed to gain one more place during the second race, which enabled him to collect his first Championship points. “Nicolai keeps improving himself. He learns quickly and is very good at adjusting to new requirements. By achieving 11th and 12th place he has exceeded my expectations,” Hetschel praised his youngster.

Next weekend the team will already be travelling to their next race. The kickoff of the ADAC Kart Masters will take place on the Hunsrückring/Hahn and Mach1 Motorsport will be there with more than ten drivers. At the same time, John Norris and Nicolai Hagenaes will start at the second ranked race of the WSK Euro Series in Sarno.