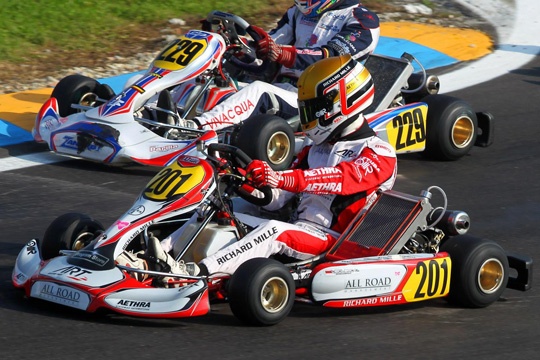 Press Release by: Art Grand Prix
ART Grand Prix were back on-track last weekend at Castelletto di
Branduzzo, as the Italian venue hosted the 2012 WSK Final Cup. The
Factory Team planned to take advantage from this event to test some of
the upgrades for the next season.
ART Grand Prix lined-up in the KF3 and KF2 classes only and completed
several material tests without aiming just for a race result. For example,
Ben Hanley entered just the KF2 practice in order to test a brand-new
chassis/engine combination. All the drivers provided their feedback to
complete the scheduled work and a huge amount of data was collected in
the process: something that could become key in setting next season's
technical base.
The Karting Division of ART Grand Prix were also pleased to rejoin forces
with Yifan Xia, who came back on-track after a broken collarbone at
Zuera kept him out of contention for two months. The Chinese youngster
showed to be in excellent physical shape and continued to climb his
learning curve in KF3, following the same successful path that brought
him positive results at his first season in go-kart racing.
The KF2 class confirmed the skills of Charles Leclerc, who clocked the
fastest lap time of the qualifying session and stayed constantly on top
during the whole weekend. In the final, due to a tough start on the
outside of the front row, Charles could not do better than 5th, but his
laptimes confirmed his competitive overall pace.
The ART Grand Prix Finland team also had a great time at Castelletto as
they lined-up in KF3 with 12-year-old Tuomas Haapalainen, Simo
Laaksonen, Olli Peltola and newly-added Elias Ilmari Korpivaara. After
having been a major star in the Finnish KF3 championship, Haapalainen
scored a top-10 result in the WSK Final Cup too, ending up in 9th place.
It's been a top result as the team looks forward to retain him for the
international 2013 season. Dorian Boccolacci was less lucky as a
mechanical issue in one of the heats prevented him from recovering
during the final.
Leclerc, Sette Camara and Xia will line-up in the upcoming SKUSA round
at Las Vegas, while the final race of the year for Ben Hanley will be at the
Macau Karting Cup - in the second round of the World KF1 championship,
where ART Grand Prix will be powered by TM Racing engines. At Las
Vegas and Macau the Factory Team will continue to balance the need to
score good overall results and the necessity to test new components to
be implemented next year.