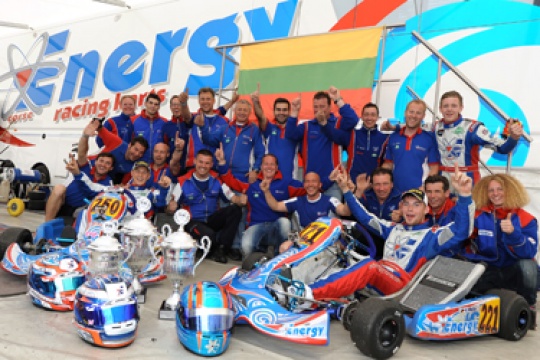 Energy Corse is definitely the reference team in KZ2. Thanks to the competitiveness of its chassis, which improves year after year, the Italian team  was crowned European Champion in 2004, 2006, 2008, 2010, and 2012! At Wackersdorf (Germany) it even conquered a double success thanks to Simas Juodvirsis and Michele Di Martino.

Overall, there were three Energy chassis in the first six places of this final round of the European KZ2 Championship. Third in Final 2 in the KF2 class, Dennis Olsen completed this great overall result for Energy Corse, achieved on 9-10 June.

38 laps in the lead in the final phase out of 38! There was not even a single lap without an Energy chassis in the lead, on Sunday. Simas Juodvirsis and Michele Di Martino (Jedi Racing Team) conquered a deserved double success in this European KZ2 Championship! And incredibly, Juodvirsis had only made his debut in this very competitive class at the start of this season. "I have made a lot of progress in just a few months with the Energy Corse Team", the Lithuanian driver admitted. "My victory in one of the two rounds of the WSK Master Series proved that we were on the right track and it is fantastic to confirm it with this European Champion title. My kart was really great, both in the rain during the pre-final and on a dry track during the final". The work of the whole team, as well as Rizzi engine preparations, have definitely paid off.

Global Results
As for the qualifying heats, Energy chassis showed top performances, both with Energy Corse team drivers as well with the drivers of foreign teams that have decided to collaborate with the Italian brand. "We were the best represented brand in the first twenty positions of the qualifying sessions, with Di Martino's 2nd place with 3 victories, Zanchetta's 7th place with 2 victories, Juodvirsis' 10th place with 1 victory, Kenneth Ostvold's 11th place with 2 victories, Ricardo Romkema's 13th place with 1 victory, and to conclude Michaël Christensen's 19th place. Nine heats won overall! With 111 entrants, it is a very satisfactory global result. Pity that Zanchetta got involved in the collision at the start of the pre-final, because he had clear winning chances. But I am very happy with the final result anyway, a year after the European Champion title conquered in KZ1", the team manager Michele Panigada commented.

KF2: Podium for Olsen
As for KF, Energy Corse confirmed again the results achieved both over the last few seasons and at the start of this season in the WSK rounds or in the German Championship. Dennis Olsen proved to be very competitive behind the wheel of his Energy-TM (with a GKS engine). "It is a pity I lost some positions in the pushing and shoving at the start of Final 1, in the rain. I felt very well after my two victories in the heats, but I dropped down to around 20th position on the first lap. I fought hard to regain ground and to exploit at best my kart, which was performing very well. In such conditions, taking the third step of the podium in Final 2 is a good result, because KF2 is very difficult this season, with over 100 entrants and an incredibly high level. And thanks to this third place, I still have my chances in the European Championship, which will end in a month's time in England", the Norwegian driver commented. Though very fast during the qualifyings, Niklas Tiihonen (Energy North Europe) was not equally successful on Sunday.