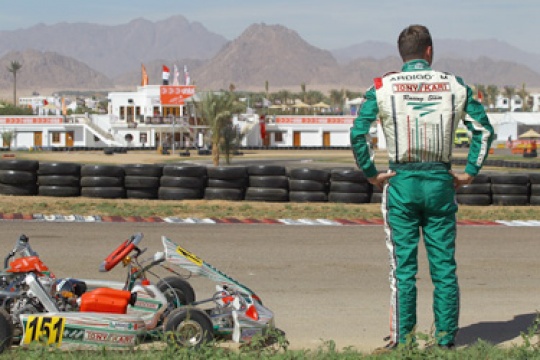 Double success in KZ2 category and podium in KF2 category, too, for our Racing Team on the occasion of the WSK World Series’ last round in Egypt. Our team fought for the tile in KF2 category with D’Agosto and Kanamaru but missed the victory for a few scores in this “family” competition, won by Kosmic Kart-Vortex with Bailly. Although this unlucky weekend for our Racing Team, our products shine at top classifications. Indeed it is the Japanese driver Kasai in KF3 category who wins with a Tony Kart-Vortex and also in KF2 class, where the winner is for both the race and championship, as already mentioned, Bailly with a Kosmic Kart-Vortex.

Unfortunately our two drivers competing for the title in KF2 category are not able to conquer the final success, won by Bailly driving the Kosmic Kart-Vortex. We highlight as the last run for the success was clearly including drivers with our factory’s products only and we are proud of it.

Both during the qualifying rounds and the heats our drivers aimed at succeeding, particularly D’Agosto who gained the third place at the grid of the pre-final, conquering the third place.

For our driver the final has been the last chance for him to win the title, since D’Agosto hardly damaged his chassis in a collision, thus missing the success.

Important recovery for Kanamaru, starting tenth and conquering the podium, right after the winner Bailly (Kosmic Kart-Vortex) and the Tony Kart-Vortex of Lock, from the Tony Kart Junior Team.

In the World Cup classification our team owns the second place, between the Tony Kart Racing Team and the Kosmic Kart Racing Department (third). On this occasion, too, it was a “family” competition, comparing on the scene the big teams adopting high quality materials.

In KZ2 category our drivers Ardigò, Dreezen and Piccoli win a round each and owns all the three starting positions at the grid of the pre-final. This competition, too, is in our favour with Rick Dreezen who leads the competitions and gets the best lap with 56’’994, and with Ardigò in second position.

During the very Final our drivers get on the podium, Ardigò second place and Dreezen third one, once more confirming with a KZ set-up both Vortex RVXX engines and Racer EVR chassis’ competitiveness.

Dreezen, thanks to the scores gained on the occasion of the Sharm last World championship’s round, conquers the second place in the Championship’s classification, behind Thonon, which we congratulate with.

In SKF category drivers Catt and Camponeschi lose time in the heats, particularly during the first, and have to recover during the pre-final. And it is right now that Catt conquers the second place.

In the Final a collision in the jam puts our English driver offside, withdrawing after 5 rounds only, missing the chance to show off all his huge potential.

All official classifications of the WSK World Series Egyptian’s event link at http://www.wskarting.it/livetime.asp

“We fought to the last for the success in KF2 category and we actually were within an ace of winning.

Unfortunately we were not able to overcome Kosmic and the Junior Team. This match has been hard and we are proud to see, once more, our products, our chassis and our engines leading all categories.”