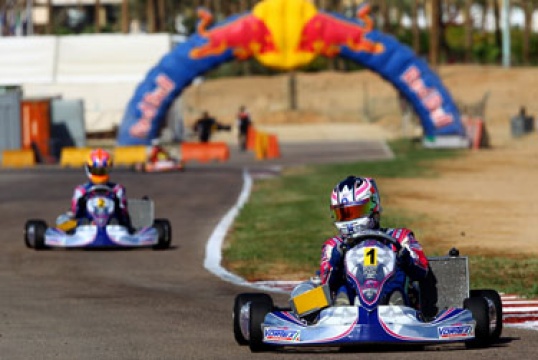 Spectacular double declutch for our colours in the WSK World Series, too. After the success in the continental series of SKF category, our Kosmic Kart Racing Department wins two times and in the World Series, held in Sharm el Sheikh, with Armand Convers in SKF category and Sébastien Bailly in KF2 one. Moreover, we also gained the teams’ title in SKF category, the World Cup. With this success, the most important championship of the year ends up with the strong Kosmic Kart-Vortex signature.

Strong emotions in SKF category with our driver Convers, in trouble during the qualifying rounds only, while Cooper leads the competition conquering the second row at the end of the qualifying heats.

All technical material is at his top performances ready both for the pre-final and the Final and decisive competition, allowing Convers to gain points in both races for the third position and to win the most prestigious title of the season, the WSK World Series’.

During the Final Convers constantly raced at top positions, also taking the control of the competition; however, its championship’s needs awarded him not to take any useless risk with the racers not involved in the title’s race.

The third position in the final allowed our driver to win over the direct rival by 5.5 points, the Dutch De Vries, thus winning the WSK World Series, after the success in the Euro Series, too.

The recovery of Ben Cooper, too, Kosmic Kart-Vortex’ team, was also important. Indeed, with the success gained during the whole championship, he got the fourth position in the Final, contributing to the Kosmic Kart Racing Department manufacturers’ victory (World Series).

As much exciting was also Bailly’s success in KF2 category. Our driver came to Egypt with a third position and after concluding a perfect weekend, with a pole position, a best lap round in the pre-final and a win in the Final, he gave us the chance to obtain a deserved title.

The KF2 competition was even more exhilarating since we were fighting with our “brother” teams, Tony Kart Racing Team and Tony Kart Junior Racing Team, comparing a well balanced technical material, and heightening the supremacy of Kosmic Kart and Tony Kart chassis and of Vortex RAD engines. The Mercury’s chassis showed off, for the umpteenth time in the season now, a very good versatility thus deserving the complete success in the World Series.

The matching with Vortex RAD engines created the perfect chassis-engine union and the double success is the clear confirmation of the strong potential of our technical “package”.

“ I believe we deserved both victories since we always proved good and constant performances during the whole championship, on very different circuits. In KF categories we have been racing with these performances since the beginning of the season, thanks to fantastic chassis and engines allowing us to show off our best. Our team always did a good job and these two victories should be the incentive to keep on working the same way. We still have important engagements on next November and what I want is not to lose the concentration inside the team”.

“I am satisfied with this success. I only regret I got it due to a disqualification of Nick (De Vries), anyway our technical level is high and our performances are alike since the beginning of the season. I thank all the team and praise the technical material, Kosmic and Vortex made and excellent job. I guess by continuing this way we will be able to end up the season at this top-level.”

“Anything was fine and I succeeded. The day before the race we could only wish to win in order to go straight to the championship and we fully concentrated on this aim. The chassis was perfect and anything worked out well, even when I lost some positions, such as in the pre-final, my kart allowed me to recover without any problem. As well, this success was possible thanks to the team-members’ job, too.”