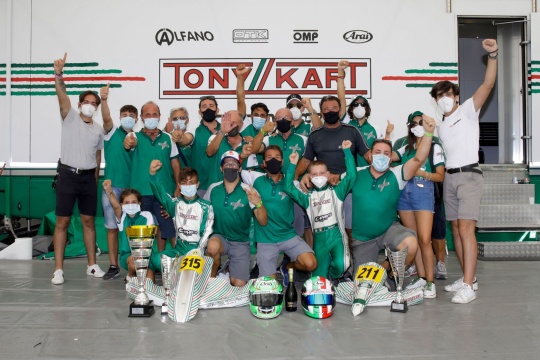 Press Release by: AG Media and Management
The Gatto family's team confirms being among the best in the ACI Karting's second round at the Circuito Internazionale Napoli, proving to be competitive in both the 60 MINI and the X30 Junior.
60 MINI - Busso on the podium in Race 2

Ludovico Busso's growth path continues. After a positive qualifying ending in second overall position, the Sicilian driver did well in the qualifying heats. In Race 1, with great determination he secured a place in the top 5. In Race 2, after taking command for a good part of the race, he finished in second position, obtaining his first podium in the Italian Championship.

Difficult weekend for Aleksandar Bogunovich who, despite an excellent 7th position (GR1) in qualifying and a very positive day of heats, was unable to make the most of his speed. In fact, the Slovenian driver was forced to retire in both races on Sunday due to some contacts in which he was involved.

Reverse scenario for Enea Frey. Following a positive qualifying, 11th position (GR2), the Swiss driver had a hard time in the qualifying heats, which forced him to take part in the repechage. After winning the latter, Frey with a great pace recovered from 29th to 13th in Race 1, to then climb up to 8th in Race 2.

Despite the good potential, the Spaniard's weekend did not go according to plan. In qualifying, the general turmoil of the last minutes did not allow him to express a good speed. In the eliminatory heats, many contacts relegated him to the last positions, making his recovery difficult. In the repechage, an accident put an end to the qualification issue for good.

Another weekend to remember for Manuel Scognamiglio, author of a great performance on his home circuit. The only "negative" was the qualification, but the Neapolitan driver was able to recover in the qualifying heats, earning the start from pole position for the first race on Sunday. After a heated fight in the top positions, Scognamiglio earned the victory in Race 1. In Race 2, starting from 8th place due to the inverted grid, Manuel recovered to head the race, to then finish in 3rd position.

Weekend characterized by ups and downs for Alessandro Minetto, very fast in free practice but unlucky since Friday. In fact, in qualifying, the traffic at the end of the session penalized the Italian driver, relegating him to 21st position. In the heats, several contacts knocked him out of the game, forcing him to start from 31st place in the first final on Sunday. In Race 1, Alessandro was forced to retire, while in Race 2 he finished in 30th position.