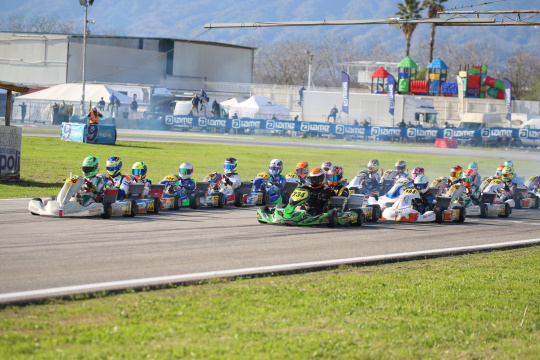 Press Release by: AG Media and Management
The Gamoto Kart team did well in the last race of the season, finishing in 3rd position in the X30 Junior category.
60 Mini - Bogunovic and Chi fast but unlucky

Despite the good speed, there was no happy ending for Bogunovic and Chi in Sarno. The Slovenian, after finishing in 8th position in the group, fought in the heats. In the final on Sunday, a contact forced him to retire after a few laps from the start. Similar scenario for Chi, who after the 10th time in the group in qualifying, was involved in several contacts in the final, which caused him to fall back to 28th position, also thanks to a 5 second penalty.

X30 Junior - Scognamiglio on the podium, Frey in the top 10

Positive weekend for junior drivers. Scognamiglio, on his home track, did not disappoint expectations, confirming his feeling with the Napoli circuit. After scoring the pole position of the group, Scognamiglio became the protagonist of a heated battle for victory, where he finished in 3rd position.
Good performance also for Frey right from qualifying. In fact, the Swiss driver obtained the 10th position in the group. In the final, a great recovery from 24th to 10th position confirms his growth in the category.

Salvatore Gatto, Team Manager: “I'm happy overall with the performances shown by my drivers. Clearly the last race of the year collides with the tiredness of the drivers, especially after a long season like the one just experienced. Gamoto, however, doesn't stop: we're already at work for 2021, and the new plans will soon be revealed.”