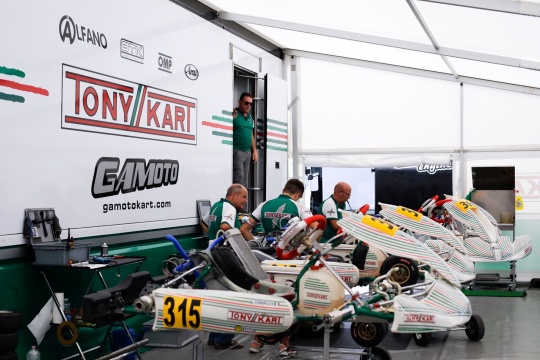 Press Release by: AG Media and Management
Rok Superfinal with no happy ending for Gamoto Kart at the Franciacorta Kartodromo where, despite the good performances expressed on the track, the two standard bearers Scognamiglio and Guirreri were forced to retire in the Junior Main Final.
Scognamiglio - Junior ROK

Since qualifying, Scognamiglio proved to be one of the grid's most competitive drivers. The Italian set the 3rd group time in qualifying practice and then confirmed him his pace in the qualifying heats as well. Unfortunately, a contact in the last heat on Saturday undermined the good things done in the previous clashes, causing the Italian to drop to 10th overall position. Starting from P10 in the Final, a contact forced Scognamiglio to retire.

A similar scenario for Guirreri, author of a positive first part of the weekend. In qualifying, the Italian scored 11th position in group 1 and in the heats the Sicilian always fought close to the top 10. Alas, same fate as his team-mate, that is, the stop in the last heat relegated him to 28th position in the combined heats. The turbulent initial stages of the Final then forced Guirreri to retire.

Salvatore Gatto, Team Manager: “Despite the good potential shown on the track, luck was not on our side. Motorsport is this, too, and sometimes you win, sometimes you lose. Regardless of the final result, I'm satisfied with the performance of our drivers, who've shown they can compete in an international-level race; this gives me hope for the future.”

The next round of the Gamoto Kart team will be the last round of the Italian ACI Karting Championship, scheduled for this weekend at the Castelletto di Branduzzo circuit.