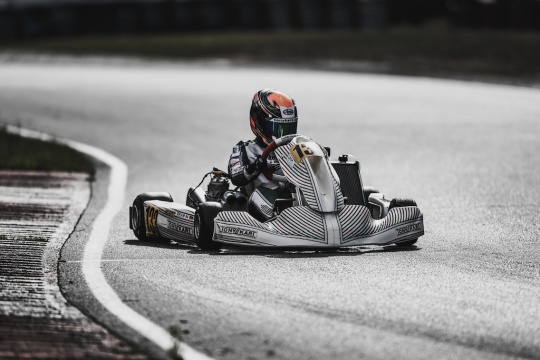 Press Release by: AG Media and Management
Youngster narrowly misses first win.
Last weekend Maxim Rehm travelled with high hopes to the Erftlandring in Kerpen. The youngster was able to prove his strong form and spent almost the entire weekend in the top five of the international driver field. In the end, it even paid off with a podium place and a trophy.

After a not so good start to the season for the Tony Kart pilot in the first run of the German Junior Kart Championship, at half-time of the championship Maxim wanted to present himself in the best light again. The 13-year-old started directly in qualifying. In the strong field of OK juniors, he finished in fourth place.

He improved further in the heats. A second, as well as a third place from the preliminary rounds, resulted in the third starting place for the first final on Sunday. "Today went very well. We have learned from past mistakes and are now winning laurels for it. Now I am trying to continue like this in the finals," Maxim commented on the intermediate evaluation.

Sunday morning in sunshine and warm temperatures, the driver from Baden-Württemberg showed his competitors that the victory belongs to him. Right at the beginning he got off to a perfect start, defended the inside line and sorted himself behind the leader, who drove a defensive race. After long fights, Maxim managed to take the lead and gain a small lead. But the competitor snug up on him again and after tough but fair fights, the driver managed to achieve a strong second place under the application of Rehm Racing.

The second race in the afternoon went less positive. Starting from second place on the outside track, the best German driver in the field had to go far and polluted his tires. This resulted in a big loss of time and space in the high-caliber and tight field. A spoiler penalty threw the youngster even further back to a disappointing 16th place.

"The first final showed that I can compete for the victory. Unfortunately, the leader blocked me for a long time, and I could not use my pace in the beginning of the race. Victory would have been possible. The second race was aggravating and did not match my expectations and even less my form from the weekend. Sometimes something like this happens unfortunately, I learn from it," Maxim summed up his race weekend.

In just two weeks, Maxim will be continuing to his personal season highlight on domestic soil. In Wackersdorf, a track on which he has already achieved many successes, to the FIA Kart European Championship. Then he fights again under the application of the Tony Kart Racing Team for a top position.