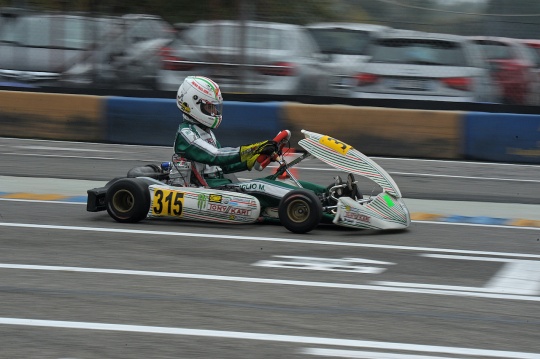 Press Release by: AG Media and Management
The Gamoto Kart team has won the Italian title in the X30 Junior category, thanks to the commendable work done together with Italian driver Manuel Scognamiglio.
The last round of the Italian ACI Karting Championship proved the Sicilian team right, having gained a decent lead in the standings over their rivals, to manage in the last two races held on the 7 Laghi Kart circuit in Castelletto di Branduzzo.

Positive weekend for Ludovico Busso, constantly in the top 5 in this final round of Castelletto. Thanks to the 4th place obtained in qualifying, Busso became the protagonist in the qualifying heats, earning the 4th starting position in Race 1. In the latter, thanks to a good pace, he finished in 2nd position. Unfortunately, due to a contact, he was forced to retire in Race 2. Thanks to the podium obtained, Busso finished the championship in 4th overall position, confirming his excellent growth during the season.

Despite his good speed, Aleksandar Bogunovic was unable to fully express his potential over the weekend. The Slovenian, after having obtained the 4th place in the group in timed practice, had some difficulties in the heats. In the two finals on Sunday, Bogunovic was relegated to 21st position in Race 1 following some contacts, and then recovered up to P14 in Race 2, showing great determination.

The last round of the championship crowned Manuel Scognamiglio as the new Italian champion in the X30 Junior category. The driver from Campania, after having earned the start in the top 10 in the two finals on Sunday, managed the advantage in the standings against his rivals, obtaining the title deservedly.

At his debut in the X30 Junior, Frey did not disappoint expectations, managing to immediately find a feeling with the new vehicle. In qualifying, the Swiss set the 16th time, before fighting in the qualifying heats. In Race 1, Frey recovered up to 14th position, while in Race 2 a contact put him out of action.

Solid weekend for Alessandro Minetto, always close to the top 10. Difficult start in qualifying, which relegated the Italian driver to 19th position. From the qualifying heats, Minetto was able to react, showing a good pace on the track. Good placings for him in the finals, where he finished 15th in Race 1 after starting 27th. In Race 2, he finished 14th.

X30 Junior - Leveau on a comeback

A weekend in crescendo for the Danish driver Leveau, protagonist especially in the finals. Some difficulties in qualifying, which saw Louis take the 27th absolute time. In the heats, a good recovery allowed him to start from 16th position in Race 1. In the two finals, the Dane moved up the rankings with a series of fine overtakes, finishing Race 2 in 10th position.

Salvatore Gatto, Team Manager: “This weekend we were under pressure, but despite this, the team worked very well and we managed to get the best possible result. The hard work paid off all our efforts, winning the Italian title in the X30 Junior. We also achieved good results in 60 MINI, thanks to the excellent placings of Busso and Bogunovic, which give me hope for the future.”