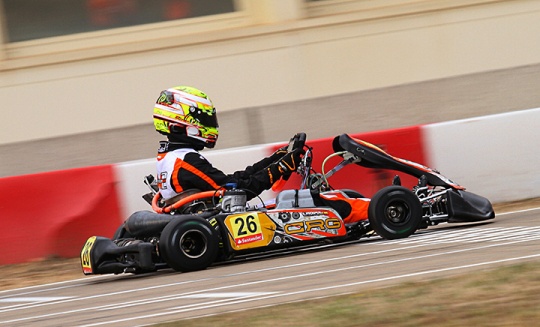 Press Release by: CRG Racing Team
Enrico Prosperi claimed the victory in the first final of the fourth round of the Spanish Championship in Alcaniz, and ended Race-2 in second place, earning the third place of the classification in the process.
Enrico Prosperi secured a great victory in KZ2 on CRG-Tm in the fourth round of the Spanish Championship that took place in Alcaniz. The Spanish driver of CRG competing for Team M2 Racing Karts put in a great weekend on the Motorland Circuit and is now standing third in the Championship.

Among the other main protagonists of Alcaniz, Gerard Cebrian Ariza has been shining in KZ2 on CRG-Tm run by RC2 Junior Team, as he was fourth in Race-1 – posting also the fastest lap of the race, while his team mate Yohan Azedo Sousa followed him. Gerard Cebrian Ariza was then fifth in Race-2, while Yohan Azedo Sousa was eighth in the second final.

Enrico Prosperi is now third in the Spanish Championship KZ2 classification at 302 points, following Eliseo Martinez who totaled 374 points and Luis Gonzalez who hauled 306 points so far.  Yohan Azedo Sousa, is fourth at 281 points, while Gerard Cebrian Ariza is sixth at 262.

In Senior, CRG has taken another podium with the Portuguese Jorge Ventura Simao on CRG-Parilla, who was third in both Finals. In Junior, Ayrton Fontecha Martinez closed Race-2 in sixth place on CRG-Parilla at the end of a 26 places comeback. A great second Final was also run by Javier Sagrera Pont, who was ninth on CRG-Parilla run by M2 Racing Karts, getting 13 positions back. Javier Sagrera Pont is currently second in the Championship, 14 points shy of the leader.

In the smallest category Alevin, Alejardo Melendez Pardi was on the third step of the podium in Race-1 on CRG-Parilla, while he closed Race-2 in sixth place. He is currently third in the Championship.

The final round of the Spanish Championship will take place in Zuera next October 1st.

All results are available at www.cronosystem.es/cek2017.