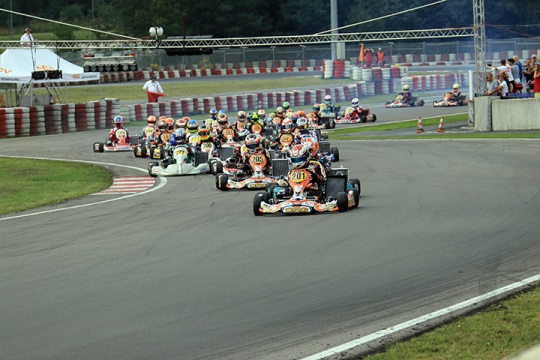 Press Release by: DKM
Three double winners at the DKM half-final in Wackersdorf, the championships still exciting right before the final.
On August 25th to 27th the German Kart Championship took place for the second time in a row at the Prokart Raceland Wackersdorf. 152 drivers started there and experienced exciting races with summery temperatures. In the end three double winners were able to rejoice – there were no decisions regarding the titles right before the season final.

The German Kart Championship and its four grade series DKM, DJKM, DSKM and DSKC are now in the crucial phase. Last weekend, the ranked races seven and eight took place in Wackersdorf (Upper-Palatine). After the season half-time in July, the highest German kart racing series started on the 1.190m long track in Upper-Palatine for the second time.

The weather was a challenge for the 152 drivers from more than 15 nations this time. Temperatures close to 30°C demanded a good condition for the fight for the top ranks. In the end, Julian Müller (DSKC), Jorrit Pex (DSKM), Kas Haverkort (DJKM), as well as Dennis Hauger and David Schumacher (both DKM) prevailed. No preliminary decisions were made in Wackersdorf regarding the titles. Things are still exciting in all four classes right before the finale in Italy.

The big showdown of the German Kart Championship is going to take place from October 20th-22nd in Italian Lonato. The highest German kart racing series is going start in Italy for the first time in history.

Motorsports fans can look forward to the best scenes of the weekend after the fourth event of the German Kart Championship again. On September 10th at 8.30pm, the automobile-, engine- and motorsports-channel Motorvision.TV is going to broadcast a 30-minute highlight magazine. All races can also be viewed in full at www.kart-dm.de.

The fight for the title at the DMSB Shifterkart Cup is still exciting after the fourth racing weekend – the first three drivers are only nine points apart. The championship is led by Julian Müller (Mach1 Motorsport), even though Saturday didn’t go as planned for him. At qualifying, Moritz Horn (CRG TB Racing Team) was at the front for the second time this season. He had to pass his lead to Nico Gruber (KSW BirelART Austria Racing Team) during the course of the heats though: With two heat victories, the Austrian was the most successful driver of the field.

During the first ranked race Gruber fell back though and watched as Müller drove towards his second victory of the season. He fought his way to the front of the field early in the race and kept his position until the end. The other places were quickly taken too: David Detmers (MSR-Motorsport WST Power) from Austria followed on second place in front of Dutchman Kay van Berlo (CRG Keijzer Racing). Alessio Curto completed the top five together with Gruber. The latter then received a spoiler-penalty afterwards and only ended up on seventh place. Tobias Mähler (Kartshop Ampfing) inherited his position.

The second final race went similarly. Müller wasn’t able to drive away from the field this time though. A group of four consisting of the Rhinelander, Curto, Lucas Speck (LS Kart) and Mähler showed a great fight for victory. Only shortly after the middle of the race the situation eased off and all positions were taken. At the finish line, Müller then had a considerable advance and celebrated a double victory. “We did really well during the trainings on Friday and I was very confident. Yesterday was pretty disappointing for me then. Today we were able to turn the tide again and showed a first-class performance”, the winner summed up. There were also no changes on the other positions. Detmers completed the cup ranks on fifth place.

Championship ranking DSKC after 8 of 10 races:

This weekend it became obvious again that Jorrit Pex (CRG Holland) is an icon of the German Shifterkart Championship. The five-time champion from the Netherlands was unstoppable. After the best time at qualifying, victories in the heats and both ranked races followed. Thereby the CRG-driver was able to increase his lead on the overall list of rankings and is close to his sixth title. “It was a perfect weekend for us. I felt very comfortable and am really happy about the double victory. It’s even greater that my brother Stan stood on the podium twice as well”, said the Dutchman contently at the finish line.

After Pex drove off from the rest of the field pretty early on during the first race, his pursuer Jeremy Iglesias (Formula K Racing Team) wasn’t in any danger either. The driver from France achieved a secure second place. Things were a lot closer regarding the third position. Stan Pex (CRG Holland) had to keep a close eye on his opponents at all times, was then able to defend the last place on the podium in the end though in front of Bas Lammers (Sodikart) and Martijn van Leeuwen (Energy Corse). German Daniel Stell (Mach1 Motorsport) came in sixth in front of current European Champion Leon Köhler (KSM Schumacher Racing Team) on seventh place.
Temporarily things seemed to turn during the second race. Iglesias took the lead after the start, but Jorrit Pex couldn’t be shaken off so easily. The Dutchman fought his way back to first place after three laps and promptly increased his advance. He was unstoppable in the end, also due to a short slow phase, and celebrated a double victory. Younger brother Stan caused even more joy for the Pex family due to his second place. Iglesias came in third in front of Lammers and van Leeuwen. Jorrit Pex increased his advance even more due to his double victory. Right before the finale in Italy only he and his brother Stan still have chances of winning the title.

Championship ranking DSKM after 8 of 10 races:

DJKM: Kas Haverkort sweeps the board

Dutchman Kas Haverkort (CRG Keijzer Racing) already highlighted his ambitions regarding the fight for the title by achieving pole position at qualifying. “I want to try to gain as many points as possible”, said the youngster before the racing weekend. During the following heats and the final races there was no stopping him then. In the end he rejoiced about two clean start-finish-victories and the temporary lead on the overall list of rankings: “This was a perfect racing weekend for us. I was the fastest driver of the field from the beginning until the end and now took the lead of the championship. I’d like to thank my team. At the finale in Italy we are going to fully attack once again to gain the title.”

There were a lot of changes on the following positions though. During the first race, Hadrien David (Chiesa Corse) acted as the hunter. The Frenchman never got the chance to attack the leading driver though. After 17 laps he achieved a secure second place. Third winner Hugo Sasse (CRG TB Racing Team) had a lot more work to do. Having started into the race from seventh place he drove forward to a place on the podium. He had to fend off his opponents William Wulf (AF Competition) and Levi O´Dey (KSM Schumacher Racing Team) until the end of the race though. “The race went really well for me in the end. I achieved important points for the championship”, Sasse summed up.

Hadrien David didn’t have it so easily at the second ranked race though. From the first meter on his opponents stayed really close by. Sasse made things interesting in the end: During the last lap, the sponsored driver of the ADAC Sports Foundation drove past the driver on second place. Behind the two followed Wulf and O´Dey on fourth and fifth places. The fight for the championship is now getting exciting once again right before the finale. The two leading drivers Haverkort and Sasse are only one point apart.

Reigning junior champion Dennis Hauger (CRG Holland) already tied in with his successful last race on Saturday. During qualifying he had to leave pole position to his brand colleague Kilian Meyer (CRG Holland), but already took the lead of the interim rankings after the heats. From this position there was no stopping the Norwegian during the first final race then. For the third time in a row he ended up on top of the podium. “The entire team has the same goal and works with great focus. The race went as hoped and was important for the championship”, said the youngster in his winner’s interview.

German Tim Tröger (CRG TB Racing Team) established himself on second place during the first third of the race, but then had to let pole-setter Meyer pass him by in the end and achieved third place in front of last year’s champion Paavo Tonteri (KSM Schumacher Racing Team) from Finland and Luke Füngeling (JS Evolution). David Schumacher (KSM Schumacher Racing Team) lost important points in the fight for the title though. After a strong catching-up race he was on seventh place, but lost lots of places due to a collision and only came in 19th.

Schumacher caused a sensation during the second final race then: Due to a sensational start he already raced forward to the top ten during the first bend and was unstoppable until crossing the finish line. The Tony Kart driver drove past one opponent after the other and came in on the well-deserved first place in the end. “This was an incredible race. You only very rarely achieve such a start. I gained ten places during the first bend. After the lost points at the last race this victory was very important for the championship. We are going to do several more tests until the finale and then we are going to attack”, Schumacher said, already looking at the crucial races. On the overall list of rankings, the Erftland resident is now 38 points behind Hauger. For him, the second ranked race was a lot more exciting: He only achieved second place right before the end of the race in front of German ADAC Sports Foundation’s driver Luca Maisch (CRG TB Racing Team) and his team mate Meyer. Saxon Tröger ended up within the cup ranks again on fifth place.

Championship ranking DKM after 8 of 10 races: