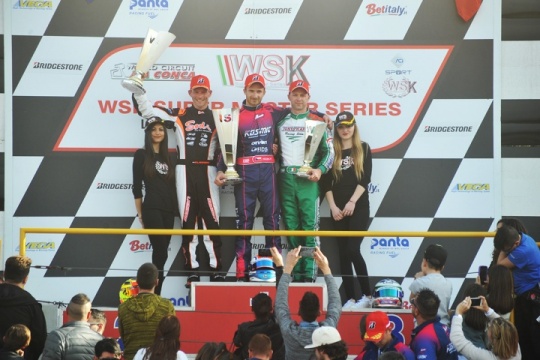 With just one round to the end of the series, we have a clearer the situation.  Sodi Kart and Bas Lammers are fast and consistent in KZ2: the Dutch has 26 points of advantage over his teammate Anthony Abbasse and 88 points of advantage over Kosmic’s Patrik Hajek. It means that they have a good chance to take home the title in Sarno. Same situation in OK and OK Junior where the Brit Clement Novalak is leading the senior class with 72 points of advantage over Ulysse De Pauw and 92 over his teammate David Vidales. In the Junior class Andrea Rosso keeps the head of the series with 55 points over Leonardo Marseglia. In Mini the fight is closer with Nikita Bedrin who leads with 209 points, followed by Gabriele Minì with 201 points and Andrea Kimi Antonelli with 195 points.

Who are next WSK Super Master Series winners?

Bas Lammers (Sodi-TM) confirms his perfect shape since Friday when he sets the fastest lap in qualifying, only 25 milliseconds faster than Marco Ardigò (Tony Kart-Vortex) followed by another Italian, Lorenzo Camplese (Parolin-TM). The Czeck Patrik Hajek (Kosmic-Vortex) wants to become the man to beat in KZ2: he finishes the series of Heats in first position thanks to two victories. Hajek manages to take control of the race when it is halfway through: he takes the leadership over from Iglesias, who has been leading the race up to that moment. The Dutch Bas Lammers achieves a good recovery starting from the back positions: he finishes second ahead of Marco Ardigò and maintains the leadership of the category. The French driver is forced to settle for fourth position ahead the local driver Alex Irlando (Sodi-TM).

On Friday the Norwegian Dennis Hauger (CRG-Parilla) sets the fastest time ahead of the French Theo Pourchaire (Kosmic-Vortex) and Clement Novalak (Tony Kart-Vortex). The Brit gains the head of the qualifying standings after heats, starting on pole the Prefinal A, while his teammate David Vidales (Tony Kart-Vortex) starts on pole the Prefinal B. On Sunday Novalak is simply unbeatable both in the Pre-final A and then in the Final, a result which allows him to keep leadership of the category. In the Final, Novalak gains an early lead ahead of the Polish Karol Basz (Kosmic-Vortex): the leading pair crosses the finishing line in this order, with Vidales third after a hard battle against the reigning world champion, his fellow countryman and team-mate Pedro Hiltbrand (Tony Kart-Vortex).

Difficult weekend for Andrea Rosso (Tony Kart-Vortex), the current leader: after a second position in qualifying behind Harry Thompson (FA Kart-Vortex) he is forced to retire during the first heat recovering until fourth position in Final. At the end of heats the pole position goes to Johnny Edgar (Exprit-TM), while Thompson is the Prefinal B pole sitter. The OKJ Final is characterised by the duel between the Harry Leonardo Marseglia (Zanardi-Parilla), who control each other until the final showdown. Marseglia passes Thompson and the Brit counter-attacks with a manoeuvre that is punished by the stewards with a three-second penalty at the end of the race. The standings, sees Marseglia winner ahead of the Italian Mattia Michelotto (Zanardi-Parilla), second after a good performance, and Thompson, third.

After a second position in qualifying behind the current leader of the category Andrea Antonelli (Tony Kart-Vortex), Gabriele Minì (Parolin-TM) grabs the Prefinal A pole position. To win the Final Minì has to deal with a pack of six opponents, who keep on exchanging positions throughout the whole race. Excellent second position for the Norwegian Martinius Stenshorne (CRG-TM), who finishes ahead of the Russian Nikita Bedrin (Tony Kart-TM). Bad luck for the Italian Alfio Spina (CRG-TM), who loses the final first position for the misplacement of his front fairing.