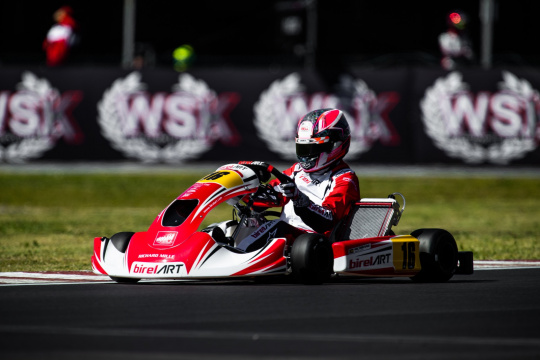 Author: Vroomkart International
The last day of the Super Master Series is beginning to take shape at Sarno, thanks to the programme of heats completed today by the four categories. Pedro Hiltbrand (KZ2), Kean Nakamura-Berta (OK), Kirill Kutskov (OK) and Iacopo Martinese (60 Mini) in front of everyone.
KZ2 - Birel Art/Lennox Racing symphony
Birel Art chassis take the lead at Sarno, staging a symphony between Birel Art and Charles Leclerc by Lennox Racing. A demonstration of strength not to be underestimated starting with Pedro Hiltbrand (Birel Art), current pole man for Prefinal A with two wins and a second place to his credit. Ahead of everyone for Prefinal B will be instead Tom Leuillet (Lennox Racing) with one fourth place too many compared to the same scoreboard of Hiltbrand. Matteo Viganò (Lennox Racing) and Laurens Van Hoepen (Lennox Racing), already ahead of everyone yesterday, will close the two front rows. First ring of the Sodi house with Emilien Denner, able to place fifth overall and third in the Prefinal B. It is worth mentioning the forced retirement in the last heat for Senna Van Walstijn, absent for the moment from the Birel Art - Sodi fight and rather delayed on the starting grid.


OK - Nakamura-Berta overtakes Powell
Exchange of positions compared to yesterday for the OKJ World Champion Nakamura-Berta and Powell. With the last heat at his disposal and the victory obtained, the Japanese driver moves to the first position overall despite being on equal points with his rival (four points each after four heats). The KR duo will therefore share the start from the first position for tomorrow morning's Prefinals. Freddie Slater keeps the RFM morale high by moving up to third position, fourth Severiukhin ahead of the first Tony Kart of Turney (current leader of the standings), further back also Tuukka Taponen and Luigi Coluccio also fighting for the final success.

OKJ - Kutskov does better than Matveev
Kirill Kutskov is the best on Saturday. The young Birel Art hopeful leads the Junior classification for now, thanks to the placings achieved (three wins and a third place). Kutskov will be pole position for Prefinal A, Bondarev will instead start as leader of B, the second rows are closed by Polish Jan Przyrowski and Kirill Dzitiev. Among the notes, red flags and slow regimes again for accidents or risky contacts starting from this morning warm-up and in the afternoon heats.


60 Mini - Martinese on top
The 60 Mini changes face with Iacopo Martinese in front of everyone. Consistency has rewarded the Italian so far (one win etc), he will be the leader of tomorrow's Prefinal A. The second pre-final led by Roman Kamyab in clear recovery compared to qualifying. Scenario changed in the last heat after the contact that put Filippo Sala and Dries Van Langendonck offside, while they were fighting for third position and a place in the first rows tomorrow. Jindrich Pesl is currently leader of the general classification but, after his exclusion from the event due to an incident that happened yesterday in the parc fermé, and thanks to the appeal filed soon after, his possible victory in the SMS would remain Sub-Judice. 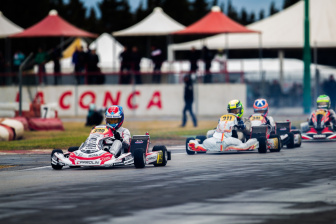