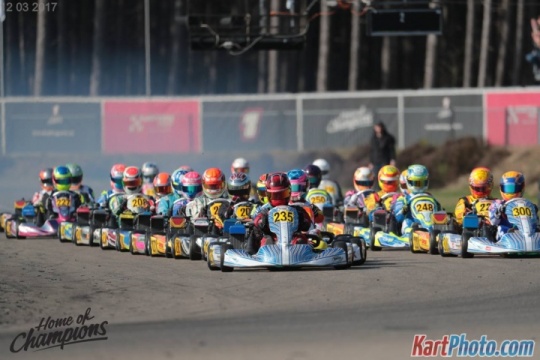 Press Release by: BNL karting series
It’s the event that officially ‘kicks off’ a year of BNL racing and a chance for drivers to dust off the cobwebs and prepare for the main season. As ever, the event was held at the Genk circuit in Belgium and a healthy entry of just over 100 drivers took to the track Friday morning to start practice.
Unlike the BNL championship rounds the Kick Off event is held over just one day in a winner takes all format. For the Micro Max, Mini Max, DD2 Max & Masters classes there would be qualifying and two finals on the day. Drivers would score points over the two finals and the driver with the most at the end would win. In the event of a tie the driver who finished higher in the second final would get the place. In Senior Max with over 40 drivers entered heats would help reduce the field down to 36 drivers where the winner would take all.

One major change to BNL racing this year came with the change from the Mojo tyres to the Apex tyres by Vega. They were brought into the Junior, Senior and DD2 & Masters classes and were received extremely well. The tyre gave the seniors up to two seconds per lap and stayed consistent over the weekend. In practice drivers were only allowed to use one set and in the last session there were 28 seniors covered by just half a second. The BNL organisers had certainly made a very good move in the competitors eyes.

Off circuit there was also a change with a camera crew preparing to stream the event live. With four cameras setup around the circuit the action was brought to viewers around the live with the aid of commentary by Chris McCarthy and Guust Specken. Off track, Ben Vanderstukken was conducting live interviews after each race.

In Micro Max the day was all about one driver, Dani van Ruiten. From warm up to Final two, Dani’s fellow six competitors just couldn’t find a way to keep up with him no matter what they tried. Dani was almost half a second clear in qualifying before going on to win both finals by a combined distance of 8.8 seconds! In this class that’s particularly impressive considering the amount of time you can gain in the tow.

In final one there was a great battle for 2nd between Lewis Moulaert and Senna Versluijs which went right down to the flag with Moulaert just stealing 2nd. The battle continued through to final two where it unfortunately ended in tears for Versluijs with the pair coming together. Moulaert was able to continue and finish 5th with Douwe Dedecker and Tom Braeken picking up the pieces. Dedecker’s 2nd got him 2nd in the points, behind van Ruiten with Moulaert hanging on to 3rd overall.

Despite the 13 kart field the story of Mini Max was the Kai Rillaerts vs Thomas Martens duel. The pair formed the front row after qualifying with Martens on pole and would go on to have two fantastic battles. In Final One it was Rillaerts who took advantage of a slow starting Martens, but Martens came back to eventually catch Rillaerts and it was game on. Martens passed Rillaerts with just over a lap to go, but Rillaerts came straight back past on the same lap which eventually led to a last lap duel with Rillaerts coming out on top.

In Final Two it was Rillaerts event to lose. If Martens won the race, he would win the event so Rillaerts had a lot on the line! The spectators and live stream viewers were treated to a fantastic final with the pair swapping places almost every lap. All the battling was bringing Milan Coppens into the fight which is exactly what Rillaerts didn’t need! However, once again it came to a last lap, last corner showdown. Martens had got past on the last lap, but wasn’t able to hold off Rillaerts in a drag race to the flag! That left Rillaerts as the event winner with Martens 2nd and Coppens 3rd.

The most dramatic finish of all came in the Junior Max class where the upper hand of winning final two won Luca Leistra the event. In qualifying it was Ilian Bruynseels who took pole with Nick Cuppens 2nd. Bruynseels got off to a good start, but was passed by Cuppens on lap four who went on to lead for a further three laps before being passed by Bruynseels again. Cuppens wouldn’t get his chance to fight back as a hard charging Luca Leistra came past on his way from 7th on the grid. Leistra then put Bruynseels under a ton of pressure, but was never quite able to get through. Behind Mads Riis drove well for his 3rd place.

Similar to Mini Max, the Junior Max second final was one that was decided at the last corner. Bruynseels and Leistra went toe to toe for the whole final with both drivers pulling off some fantastic moves throughout the race. Behind Kobe Pauwels had come through from 6th to 3rd and was hunting them down! Leistra had led going on to the penultimate lap, but lost it as Bruynseels looked to had sealed his victory, but heading into the last corner Bruynseels slightly over defended and Leistra got an almighty run which saw him win by 0.026 seconds! The result saw the event swing in Leistra’s favour as he had the advantage of being the higher placed driver in final two which left Bruynseels gutted! Pauwels was 3rd overall.

With over 36 drivers entered into the Senior Max class, they ran a different format of qualifying and heats before a Final at the end of the day. Jordan Brown-Nutley is the inform man in the class and took pole before going on to cruise to a comfortable victory in heat one. In heat two it was Dylan Lahaye who was practically unstoppable as he made his way through from 6th to 1st where he was barely challenged as he took victory. Heat three saw a Lahaye, Brown-Nutley showdown as they battled for pole position in the final. Although Brown-Nutley led most of the race, Lahaye had clearly been patient in his approach as he slipped through to win the third heat and take pole position.

The Senior Max final, unsurprisingly, turned out to be the best race of the weekend! It was a hectic race which saw a number of lead changes and the on looking spectators having to constantly decide where to look. The three main contenders for the win were Jordan Brown-Nutley, Dylan Lahaye and Noah Roovers. Between laps 5 and 13 all three drivers led, but it was lap 13 which saw Brown-Nutley win the race. His move on Lahaye got him a gap and with Lahaye now having to deal with a hard charging Berkay Besler, Brown-Nutley took the win. Lahaye was passed by Besler but managed to find his way back through on the exit of the last corner in a drag race to the line!

There was a new face to the DD2 field in the shape of Glenn van Parijs. Glenn was the Senior Max Champion in the BNL Karting Series last year and has clearly taken no time to adjust to the DD2 class as he took pole position. He was absolutely unstoppable in Final One and took a lights to flag victory winning by over four seconds! Behind Constantin Scholl was never challenged for his 2nd place and despite some early drama’s reigning BNL Champion, Kevin Ludi managed to eventually finish 3rd place. In the masters despite a six months’ absence from karting Tamsin Germain managed to hold off the challenges of Christophe Adams.

Heading into final two van Parijs’ only real threat was Scholl. If Scholl were to win and van Parijs finish 2nd then Scholl would win the event. Of course, if van Parijs were to finish 3rd that could open the door for Ludi too. Between final on and two, Ludi had found a real turn of pace and was quickly passed Scholl and reeled in van Parijs. On lap 12 Ludi went through and with Scholl over a second back van Parijs didn’t need to fight but he did on the next lap! It came to yet another last lap showdown where, despite Ludi’s best efforts, van parijs held on to win the kick off event! In the Masters Adams was just able to hold off Germain by two tenths to steal the kick off victory overall.

The BNL Karting Series will be back for round one of the 2017 championship on the 8th/9th April at the Genk circuit in Belgium. 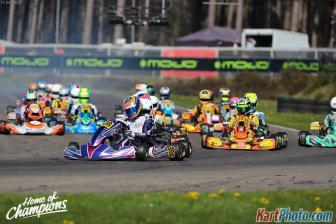