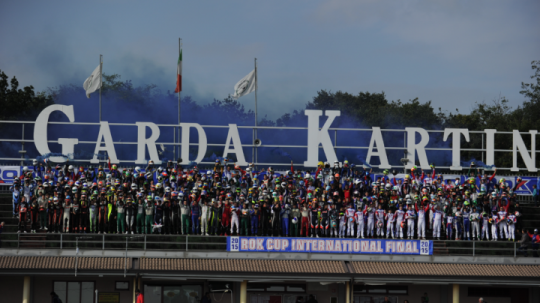 Press Release by: Rok Cup International Final
Astonishing figures with 422 Rokkers at the start. An uninterrupted show of races and color that from Wednesday (19th) to Saturday (22nd) will move the renewed Italian South Garda circuit, ending with the unforgettable Rok Party. The Rok Final charm involves renowned names such as Doohan, Fittipaldi, Trulli, Montoya, Badoer and Barrichello, present in the paddock to follow the exploits of their children. But there will also be a special Rokker in this edition, the Brazilian Rubens Barrichello, who will give put on track his great passion for karting throwing himself into the addicting Rok Shifter. Many renowned names that will blend with a sea of ​​Rokker drivers from around the world, representing 51 different countries and five continents.
As always to make a prediction is impossible, in fact in the hard-fought Rokker lineup of the entry list there are international champions.
The Mini Rok is in search of its king as the reigning champion Leonardo Marseglia jumped in the international OKJ categories and will not be able to defend his title.
After three years of Italian supremacy (Marseglia 2015 and Abrusci 2014-13) we will see if the Mini Rokker world drivers will be able to beat the householders. The last driver who succeeded was the South African Clinton Bezuidenhout in 2012.
The Junior Rok is another category that promises to be explosive. It’s still alive in the memory of everybody the formidable sprint finish, with collision, which crowned the 2015 champion Danny Carenini, to the damage of the South African Stuart White and the two-time Rok Italian champion Francesco Pagano.
This year, too, the three above-mentioned Rokkers will be on the track, but many of their rivals have grown and trained, so we can expect an even hard fight, perhaps with a less daring arrival.
The defending champion, the Polish driver Szymon Szyszko (the past year the category was called Rok) will attend the Senior Rok class. Szyszko in 2015 was the only non-Italian champion, breaking a record that many wish to break for taking the prestigious Senior Rok title (but not only this category) in other countries of the world.
Riccardo Cinti is the international Super Rok champion and has recently repeated his national title, winning the Rok Cup Italy. With two international and four national titles, all won in the Super class, Cinti is the Rokker driver to be defeated, in a category where performances are formidable and, while having a less numerous entry list, presents top drivers among its starters.
The Shifter Rok is the category with the largest number of international champions at the starting grid. Cristopher Zani and Danilo Albanesi are the two Rokkers boasting two titles each, but for both the victories did not arrive in the category with the gear.
Zani won twice the International Final in the Super Rok class and Albanese was champion in the Senior first and Super category then.
Giacomo Pollini, the defending champion, will not be in tussle, but the reasons of interest are many in this category, which has grown well and in a short time due to top technical contents.
Needless to say, the spotlight will be focused on Rok #405, at the wheel of which there will be the Brazilian Rubens Barrichello.

REGULATIONS. Before putting the wheels on track pay attention to the information included on the race regulations :
LINK ITA.
LINK ENG.

MEDIA. LIVE VIDEO AND WEBSITE TO BE FOLLOWED
The journalists at the Rok Cup International Final 2016 will be many and from all over the world. The interest that the Rok Final catalyses is growing and the number of webpages, magazines and sites that will follow the event is formidably growing.
Never lose sight of the social pages and the official www.rokcup.com website. Here you will find all the latest and detailed information. But not only, to stay informed about what is happening on the track, download the official app of the event.
The great success achieved by the live streaming on the past edition wants us to repeat the experience, so also this year the final day of the competition (Saturday, October 22nd) will be fully broadcast live.
In addition to the videos, each stage of the event will always be live timing.

THE MOTORSPORT WATCHES ROK. Dizzying figures with 422 Rokkers at the start, 51 Countries and 5 continents mark the importance of an event of international value, absolutely at the top in the karting world.
The names of motorsport champions who will make the paddock Rok their home during this week, is unforgettable. Mick Doohan (former world 500 motorcycle champion), Emerson Fittipaldi (former F1 World Champion and IndyCar Champion), Juan Pablo Montoya (former F1 and Indycar Champion), Jarno Trulli (former-F1 driver), Luca Badoer (former-F1 driver), Ralf Schumacher (former F1 driver) and Giorgio Pantano (ex-F1 driver).
A special place will be given to Rubens Barrichello, who will not be "only" seated in the stands to cheer on their children but the former Ferrari driver will be at the wheel of his Rok Shifter chassis to go wild in the race!

NEW CIRCUIT. The beauty of the place is well known to all, Lake Garda and the area attractions are many. This year the very Grand Rok Final will have a great novelty, the track design. Early in the season, the new design of the South Garda track was celebrated, now 1.200 meters long and made even more challenging by the new bends featuring its configuration.
So this will be a further incentive for the 430 Rokkers that will face in the fourteenth Rok Cup International Final’s edition.
Let’s go on board with Luca Corberi, official Vortex driver.