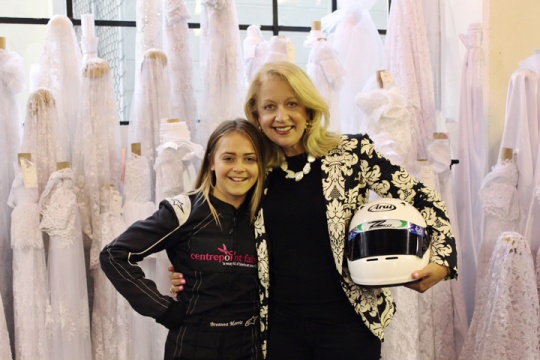 Press Release by: KartSport New Zealand
Reigning New Zealand Vortex Mini ROK class champion Breanna Morris is off to Italy this week to contest a round of the ROK Cup Italy series at the South Garda Karting circuit near Milan over the weekend.
When the 12-year-old from Auckland's North Shore won the 2016 New Zealand Vortex Mini ROK class title at the Giltrap Group KartSport New Zealand National Sprint Championship earlier this year she earned the right to represent New Zealand at the ROK Cup International Final meeting at the South Garda Karting circuit in northern Italy in October.

To help her acclimatize to the track and level of competition in Europe the manager of the GP Karts/N-Zed Motorsport team she runs with here, Daniel Bray, suggested Breanna attend a round of the Italian series at the track beforehand.

When long-time motorsport mentor Peter 'PJ" Johnston agreed to help out with costs, Bray - who when he is not running his own GP Karts team at home races for Italy's GP Karts team in Europe and the United States - organised an entry and kart/engine package for Breanna to compete with the factory-backed G-Force team this weekend.

When Breanna and her father Steve arrive in Italy they will head straight to the track at Lonato and spend three days' testing under the watchful eye of Bray before the weekend (July 02-03) race meeting.

The pair will then return home and start preparing for the International Final meeting being held this year between October 19 and 22.

Having played a key role in the careers of four-time US Indycar champion, and Indianapolis 500 winner, Scott Dixon, as well as reigning FIA World Endurance champion Brendon Hartley and multi-time NZ Midget class speedway title winner Michael Pickens, Johnston says that he and his wife, Meegan Pollock, were happy to help someone as talented and determined as Breanna.

It was Ms Pollock, in fact, who suggested that rather than Breanna race under the banner of her husband's motor vehicle import and retail businesses she instead should carry the colours of Pollock's own company, leading New Zealand fabric retailer, Centrepoint Fabrics in Auckland's Newmarket.

"There are some real synergies between Breanna as a successful young sportswoman and the business I run and I see this as a fantastic opportunity for her to become an ambassador for Centrepoint Fabrics," Ms Pollock said.

Also helping with the cost of the trip are Wayne Green and Sebastian Jonsson of Auckland demolition specialist Green Way Ltd.