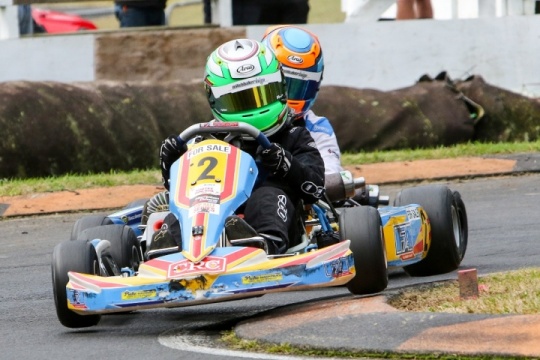 Press Release by: Kartsport NZ Inc.
Young Christchurch karter Louis Sharp led home a South Island lock-out of the podium in the Cadet ROK class at the opening round of this year's Hampton Downs-backed Top Half Series at Te Puke on Sunday.
Making the long trip north worthwhile Sharp was joined on the round podium by James Black from Dunedin and Jaxon Harvey from Mosgiel, with the first of the North Island drivers, Tauranga's Hayden Lines, fourth.

It was an impressive showing from all three, with NZ and South Island Sprint Championships #1 Sharp winning four of the five Cadet ROK heat races and finishing second in the other.

Only Darren Walker came close to matching that record on the day, the Tauranga driver winning four of the five Rotax Heavy class heats but finishing third in the other.

Despite a crisp start to the day and changeable weather this year's Hampton Downs Top Half Series opener attracted a 130+ entry (which included drivers from the eight member; clubs as well as sign-ons like Sharp, Black and Harvey from the South Island) and produced close, exciting racing in all seven classes.

Hamilton ace Clay Osborne also did well, winning three of his five races to top score in the Vortex Mini ROK, one of three classes which - because they were over-subscribed - ran to six heats.

Second in Vortex Mini ROK was Liam Sceats from Auckland, third the first of the local club members, Matthew Membery.

Junior Rotax was also over-subscribed, and such is the depth of competition in the category at the moment, eventual class winner Ashton Grant from Auckland was one of six different heat race winners. One of those was Ryan Crombie who ended up second overall, another Zac Stichbury from the Hawke's Bay who finished third for the round.

Surprise winner of $500 in the class's standalone Dash for Cash race, meanwhile, was Quade Krissansen from Auckland. Quade was the only driver who started the race in wet tyres……..and when it rained he worked his way to the front to take the chequered flag almost 14 seconds ahead of Conrad Clark from Rotorua, and Sam Wright and Ashton Grant from Auckland.

Being consistent as well as quick earned Corey Green the top spot in Rotax Light, the local driver one of four to win one of the six class heats. Runner-up Sam Taylor from KartSport Rotorua, and Green's KartSport Bay of  Plenty clubmate Taylor Harte (who finished second and third respectively) both won two apiece but with no finish lower than fifth place it was Green who top scored, albeit by just two points over Hunter and three over Harte.

Another local driver to enjoy a winning run was Sam Waddell who top-scored in the Rotax DD2 class from Aucklanders  Bond Roby and Jason Lee.

The top spot in ClubSport 120 also stayed in the 'Bay, where class stalwart Graham Knight, the President of Edgecumbe's KartSport Eastern Bay of Plenty club, was the dominant driver, winning two of the five heats and finishing no lower than fourth in the other three.

The event incorporated Round 3 of the ROK Cup.

With previous class ROK Cup NZ Cadet ROK class points leader Emerson Vincent moving up age groups to Vortex Mini ROK at Te Puke, Louis Sharp has jumped into an 11-point lead over Jaxon Harvey from Mosgiel and Ashton Phipps from Auckland with just one round of the series to go (NZ Schools Championships at KartSport Marlborough in July).

More information on this year's Top Half series can be found on KartSport New Zealand's website www.kartsport.org.nz/events/2017-top-half-series and Facebook page www.facebook.com/TopHalfSeries