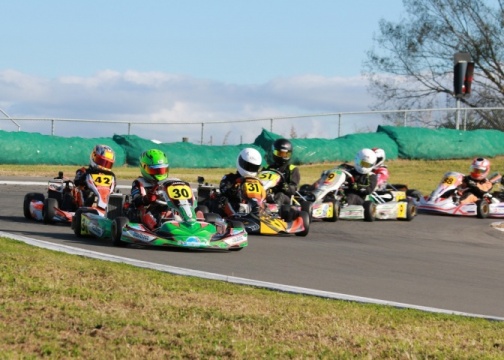 Press Release by: KartSport New Zealand
Kiwi karters Liam Sceats and Louis Sharp are off to Melbourne again later this year after sealing ROK class wins at the final round of the 2016/17 Manawatu & TRC Toyota WPKA Goldstar Series in the Hawke's Bay over the weekend.
For the past three years the overall series' winners of the Vortex Mini ROK and Cadet ROK classes have earned entries to, and karts to use at, the annual City of Melbourne kart meeting in August thanks to NZ Tony Kart and ROK engine importer Maurice Frost of Supreme Kart Supplies & Engines of New Plymouth, and this year Gary Douglas Engineers of Palmerston North.

For each driver it will be a second trip to the meeting. Current South Island and New Zealand champion Louis Sharp first went in 2015 when he won the Goldstar Cadet ROK title for the first time, while Liam Sceats went last year when he won the Cadet ROK class title.

This year Sharp won back the Goldstar Cadet ROK title while Sceats (who has moved up an age group) won the Vortex Mini ROK one.

Prizes for them included free entry to next year's Rotax Max Challenge series courtesy Rotax engine importer and series organiser Right Karts (Jackson Rooney), a Hot Lap and two tickets to a day at a race meeting with Simon Evans and Smeg Racing (Campbell Jamieson and Braden Parsons), and free entry to next season's series for the winner of the Open class (Jacob Cranston).

This season's Goldstar series again produced some of the best and closest racing in the country, with the final round no exception.

New Plymouth ace Campbell Jamieson earned his first series round win in Rotax Max Light, pipping Michael McCulloch from the Kapiti Coast by one point and claiming the series win on countback after the pair both ended up with 172 series' points. Olivia Yardley from Christchurch kept the flag flying high for the country's female drivers in third with Palmerston North's John Wallace fourth and Tauranga speedway champ Sam Waddell fifth.

Where the racing was closest and the depth greatest, however, was in the two ROK-engined Junior classes.

In his first appearance at a Goldstar round this season young Hamilton driver Clay Osborne won the day in Vortex Mini ROK though second place was more than enough for Liam Sceats to take the series' title. Palmerston North driver Jenson Bate had one of his best days to date with third overall from Logan Manson from Levin and Sebastian Manson from Auckland.

Recently-crowned class NZ Sprint champion Louis Sharp from Christchurch finally met his match in Cadet ROK, ending up third on the day behind Pukekohe's Emerson Vincent and top local driver Thomas Bewley. It was close though, with Vincent and Bewley both claiming two heat wins apiece and second and third placings going to countback after Bewley and Sharp ended up tied on points.

With wins at both previous rounds, the Cadet ROK class series win was Sharp's for the taking with Vincent second, Bewley third and Judd Christianson from Palmerston North fourth.

The standalone class Grand Prix races are a key part of every Goldstar round and points are also collated across the three rounds to find the series' GP winners.

The weekend round in Hawke's Bay was the final series' one for this season's Manawatu & TRC Toyota WPKA Goldstar Series. The KartSport Manawatu club now runs the annual standalone 'WPKA Championships' meeting in Palmerston North on Sunday June 04.