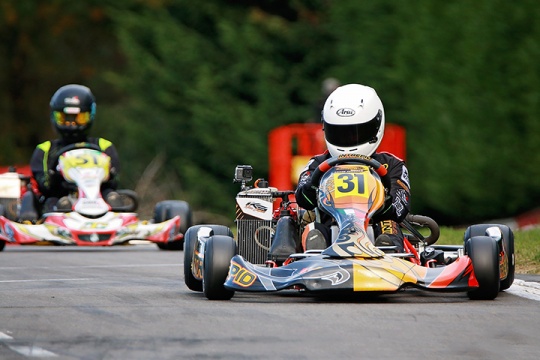 Press Release by: KartSport New Zealand
Winners are grinners and there were no bigger smiles than those on the faces of Juniors Riley Jack and Asten Addy at the annual Manawatu & TRC Toyota WPKA Championships kart race meeting in Palmerston on Sunday.
Local lad Jack stepped up to dominate the Junior Rotax class, winning three of the five heats - from fellow Palmerston North young gun Jackson Rooney and Hawke's Bay driver Zac Stichbury - as well as the standalone class Grand Prix race, from Rooney and top New Plymouth driver Thomas Boniface.

The annual WPKA Championships event was held in cool, crisp conditions, making kart set-up tricky on a track which did not warm up until later in the day.

That didn’t stop drivers from all over the North Island who had entered the meeting putting on some of the best racing seen over the Goldstar series.

So close was it in the Cadet ROK class that the final result had to go to a countback, after fast-rising Hawke's Bay driver Tom Bewley tied on points with Pukekohe driver Emerson Vincent.  It was Bewley's day though, the youngster from Havelock North also winning the class Grand Prix, from Vincent and current class North Island champion, Kiahn Burt.

Another local ace, Braden Parsons, again proved to be the driver to beat in the ClubSport 120 class with three wins from five starts. However, it was Wellington's Brent Melhop who was quickest of the Briggs and Stratton LO206 class drivers in the combined races, seeing off Shaun Hibbs from Hawke's Bay and finishing an impressive second overall behind ClubSport 120 driver Chris Parkinson in the ClubSport Grand Prix race.