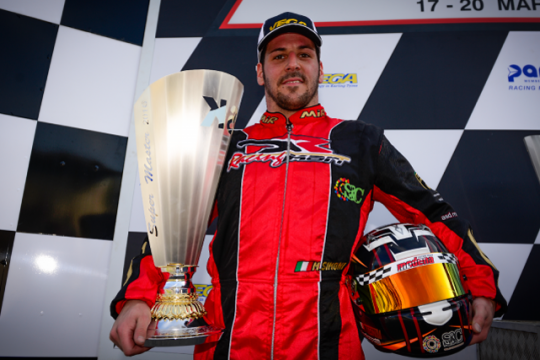 Press Release by: DR Racing Kart
The DR chassis line has been very successful so far this season in a wide variety of categories, but the team is looking for even more accomplishments in the next few months of racing. Most notably the material has shown very strong performance in both CIK as well as TAG categories like Rotax, both with the factory team and the privateer teams.
Our factory team was present in all WSK and CIK races so far, with great performances from the DR chassis like the podium for Mauro Simoni in KZ2 at the WSK Super Master Series in Sarno, but also several times where the final result didn’t reflect our performance on track, such as the WSK Super Master Series in Castelletto, where Justas Jonusis lead the heats and the prefinal race in OK Junior for several laps, just for a technical problem not letting him take the start on the final race from second row of the grid.

In the Rotax front VPD Racing has proven that the DR Kart is ready to win in all categories with multiple podium finishes this season. With Mick Wishofer and Ferenc Kancsar in DD2 we saw some very impressive performances thus far with podiums in the BNL Series, the ADAC German Max Challenge, as well as the top level Rotax Euro Challenge, along with a pole position at the most recent round at Castelletto. In Senior Max Christopher Dreyspring has been a tare with a podium at the Euro Challenge in Castelletto and being undefeated so far in the ADAC German Max Challenge.

But the good performances don’t stop there. Our partner team in Germany saw their driver Maximilian Paul on the podium in the first round of the DKM in the KSKC KZ2 category, and continued with a double win in the ADAC Series in Germany with Tom Lorkowski in KZ2 and Jakob Bergmeister in bambini class. In Romania JMS performance took a win in KZ2 with Aldin Opran and showed strong performances in mini, and in Spain Adrian Schimpf triumphed in Rotax Junior. Dutch driver Dani van Dijk found himself on the podium in BNL in mini max.

The factory team now heads to Adria with high hopes in both OK Junior and KZ2. Mauro Simoni, Christopher Zani and Ingvild Liseth will lead the squad in KZ2 and Justas Jonusis, Martin Herencia and Mizzuddin will try to turn the speed demonstrated in the first few races into some top results. Our team will look to change the course of their championship this weekend by fighting for podium positions.