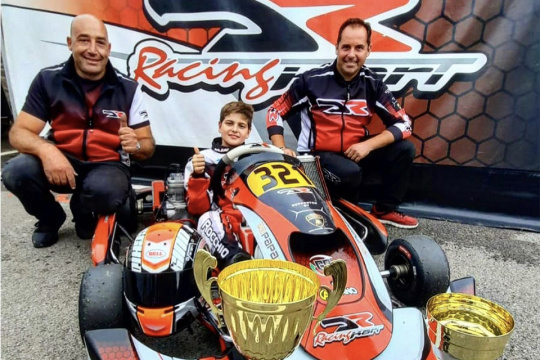 Author: Vroomkart International
We had the opportunity to speak directly with Danilo Rossi, owner of the homonymous kart builder team, about the season that is about to end.
Danilo, tell us about this season of yours that is coming to an end.
This has been a really full year because we, as DR, participated in CIK-FIA international races in the KZ category, as well as WSK and international races, such as Le Industrie, and various others. Then we also engaged in the Italian Championship and the IAME Series with some races. As you can see, a very full schedule! This year, compared to other years, we were more dedicated in the Mini, both with new and already more experienced drivers and we did quite well in terms of performance. As regards KZ, I’m also happy and satisfied with our performance: at the World KZ we started behind, but we managed to win two or three batteries. We also got a podium in the WSK! Victories, unfortunately, there were none at the international level, but around the world our chassis won many races in many categories.

What do you have in store for next season?
The calendar will still be nice and full. There will be the new OKN and OKJN categories that will replace X30 in the Italian Championship. There are a lot of ASNs pushing for this new category; let's see what position it will take in the market! Our commitments will always be to the WSK, the Italian Championship, and the CIK-FIA race circuit, which from next year we also want to address with OK-OKJ categories.

What do you think about the new OK-N category?
It’s a new category at the national level that, for me, allows drivers to get closer to what can be an international category like OK-OKJ. The sense and my interpretation of this novelty is this: today, a kid who races in a national championship with a one-make and then decides to do a world championship race or an international race finds himself in a completely different reality. Instead, with this category you create a closer link between the national and international levels. We find ourselves racing in Italy in the WSK with a mostly foreign driver pool, but there are many national drivers who go from national championships to European and world championships who find themselves with totally different products. You had to somehow decrease this disadvantage.

How do you see the national and international market today in karting?
Us, it’s been years that we’ve been dedicated more abroad, both commercially and as dealer sales points. In Italy, we are present, but in a less exhaustive way. We are also growing at the Italian level, also because by participating in one-make championships and the Italian Championship, interest in us has grown. But, again, abroad at the moment we are still more present than in Italy.