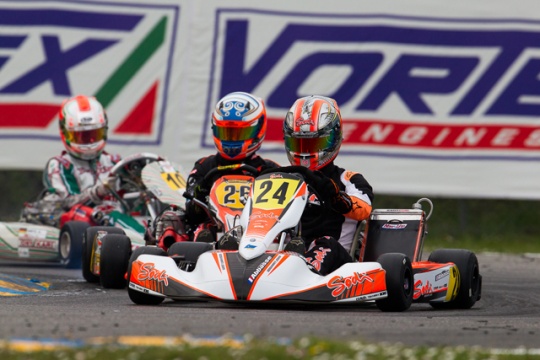 Author: Vroomkart International
An amazing performance of Sodi Kart drivers gave them a great victory over Paolo De Conto. Nielsen confirms himself in the OK class, while the Moroccan Taoufik triumphed within the OK Junior. Incredible week-end and victory for Francesco Pizzi in the 60 Mini.
A difficult week-end went on scene at Sette Laghi circuit, near Castelletto di Branduzzo, Pavia (Italy): ought to the incredibly bad weather condition, the qualyfing races scheduled on Saturday were cancelled and the prefinals starting grinds were based on the results of qualyfing. The weather on Sunday was better, and allowed drivers to race this first appointment with the WSK Super Master Series.

In KZ class Paolo De Conto (CRG-Maxter-Vega) conquered the pole position on Saturday morning in front of Marco Ardigò (Tony Kart-Vortex-Vega) and the French Anthony Abbasse (Sodi Kart-TM-Vega). The pefinals have showed an unstoppable domain respectively for De Conto in the prefinal A, and Ardigò in the prefinal B. In the final, the spotlight were pointed on the prefinals’ winners but they did not take into account the incredible pace of the Sodi Kart duo, composed by the French Anthony Abbasse and Bas Lammers. The battle started after the green flag when a contact between Ardigò and De Conto pushed the Tony Kart driver back in the group, while De Conto was leading the race followed by Abbasse. After an exchange of positions at the top, it was the moment for Bas Lammers, who started fourth and overtook Paolo De Conto, grabbing the third position during the sixteenth lap. Just two laps of waiting, and Lammers got the better of his teammate, that did not give up and passed first position under the checkered flag. Stan Pex (CRG-Vortex-Vega) won the KZ2 class.

Within the OK the fastest driver during the qualyfing session has been the American Logan Sargeant (FA Kart-Vortex-Vega), who started in front of Pedro Hiltbrand (CRG-Parilla-Vega) and Nicklas Nielsen (Tony Kart-Vortex-Vega). The American seemed to be the winner of the prefinal until the eleventh lap, when the Spaniard Hiltbrand made his move on the Ricky Flynn Motorsport ensign, cumulating a good gap until the finish line. Thomas Joyner (Zanardi-Parilla-Vega) emulated Hiltbrand, overtaking Nicklas Nielsen in the same lap, earning the last step of the podium after a tight battle. In the final race a contact after the start between Sargeant and Joyner ruined the race of the American driver, who finished twentieth after a recovery from the bottom. Also Basz (Kosmik-Vortex-Vega), Trevisanutto (Tony Kart-Vortex-Vega) and Van Leeuwen (BirelART-Parilla-Vega) have been involved in the tangle of the first corner, throwing away their chances for the victory. So the leader of the race has been Hiltbrand, until the ninth lap when Thomas Joyner overtook him inside the turn one, gaining the leadership of the race. Few laps later Nicklas Nielsen decide to repeat the victory achieved at Lonato two weeks ago, and he overtook Hiltbrand during the lap thirteen, and later grabbed the first position passing Joyner, mantaining it until the end of the race. Also Hiltbrand, Lungaard and Simmenauer (Tony Kart-Vortex-Vega) overtook Joyner, who finished fifth. Great recovery for the Danish Lungaard (Energy-TM-Vega) who started eleventh on the grid, taking home another third place after Adria one month ago.

After the pole position, in the prefinal A of the OK Junior, Ulysse De Paw (BirelART-Parilla-Vega) ruined his week-end during the first turn with an error which threw him back to the seventh place. The prefinal A has been the stage for an amazing performance of Timothy Peisselon (FA Kart-Vortex-Vega) who won after a great recovery from the seventh place on the grid. Runner up place for David Vidales (Energy-TM-Vega) followed by Kiern Jewiss (Ricciardo Kart-Parilla-Vega). Sami Taoufik (FA Kart-Vortex-Vega) conquered the prefinal B in front of Fin Kenneally (FA Kart-Vortex-Vega) after an overtaking during the eighth lap. Third place for Isac Blomqvist (Tony Kart-Vortex-Vega). The poleman Peisselon lost three positions after the green flag of the final race, and things went worst because he finished in seventh. Sami Taoufik was pleased to take the leadership, and behind his shoulders the Swedish driver Blomqvist got the better of his opponents, grabbing a great second place in front of Vidales and Kenneally.

Within the most crowded class, the 60 Mini, Mallet Evann (CRG-TM-Vega) won the pefinal A in front of Francesco Pizzi (Energy-Iame-Vega), who started in twentieth position on the grid, and Nikita Bedrin (Energy-TM-Vega). Francesco Crescente (EVO Kart-TM-Vega) won in solitude the prefinal B, followed by Leonardo Caglioni (EVO Kart-TM-Vega) and Adam Putera (CRG-TM-Vega) who started tenth. The final race has been the main stage for the protagonist of the week-end, Francesco Pizzi (Energy-Iame-Vega): the Italian driver started perfectly in the final, leading the group until the checkered flag. Second position for Leonardo Caglioni (EVOKart-TM-Vega) who has been chasing the leader during all the race, managing his advantage on the third Adam Putera (CRG-TM-Vega).